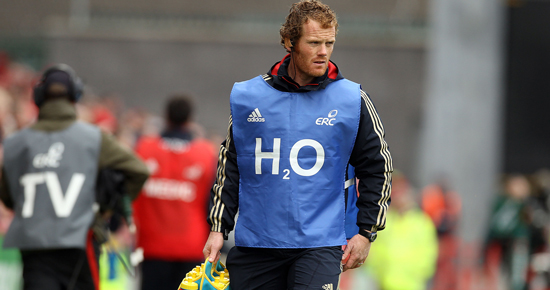 Here’s part 2 of our catch up with Head of Fitness Bryce Cavanagh.

That’s more so important during the season because we are able to manipulate training sessions where we can take some of the stuff we’re using in the wrestling and we can incorporate that into skills sessions, like Axel with his breakdown work.

It’s almost like killing two birds with one stone, we get a conditioning benefit out of it and they get their coaching benefits out of it. That’s the way forward as we try to maximise our time. Everyone wants a piece of the pie, everyone wants a piece of the player’s time and you just can’t keep adding to it. You just can’t keep training more and more and more, it’s about trying to find a common ground.

For example every Wednesday we do conditioning games, they’re fun, the players like them and the guys don’t realise they’re working that hard. But we’re getting a conditioning benefit and Ian Costello is getting his decision making and continuity work so there’s a two pronged attack.

We’ve just managed to get a deal with Catapult, a GPS company who have provided us with over twenty GPS units so we can quantify those conditioning games and we can see exactly what we’re getting out of the players.

I think they say guys like us need a sadistic streak to be a strength & conditioning coach. We try and hide it but I get a grin on my face when we’re running through a session and guys are struggling or guys are breaking, but I know I’ve done my job and I know it’s a bit of an old school mentality but we need a bit of that.

But that is the culture here, and I could write the best physiological training programme that there is, but I really think there’s a mental aspect to conditioning as well and that’s 50% of what we do.

It’s all about taking players to that dark place, so when they are in a game like Northampton last year and there’s 41 phases in the last few minutes and they’re off their feet and ROG kicks goal there's a perfect example of that feeling. I love seeing something like that because I feel as though in some way we have had an influence on them to go those 41 phases and not break mentally.

Players hate that yes and players thrive in it but you do learn a lot about players from it, and on occasion we sit there on the side-line with a smirk.

I laid down the law before breaking up for off-season, and we set some sessions and tough work for the players to do on their own. We gave them 2 weeks off and I told them to build the guilt, and then they had 3 weeks of work to do on their own before they came back.

I threatened to send guys back to the academy training in Rockwell if they didn’t come back in good shape and that was directed at all the squad. I wanted to and expected to send someone back.

But in the end I was trying to find someone to send just for the sake of dropping someone back because I was that impressed with them ,and now it looks a bit soft but I couldn’t find anyone who hadn’t done the work.

They’ve really come back in good nick and standouts for me would be Stephen Archer, he’s come back in unbelievable shape. Sean Dougall who’s come on board this year looks like from a physical aspect that he’s an impressive athlete and even some of the young guys are fronting up. We had a very tough session last week where academy players Ronan O’Mahony and Corey Hircock stood out so it’s across the board really.

Changes for next season…..

There have been big changes within the Strength & Conditioning dept. and within the whole department. Within mine I’m really happy where we’re at.

I know we’ve only been at it three weeks but we’ve got Aidan O’Connell there, who’s obviously been here a number of years, Will Cuddihy an intern from last year has come on board, Will Douglas who formerly worked with the Welsh Rugby Union side and PJ Wilson who’s done some work with the Cork footballers and come through the academy system helping out there.

I couldn’t be happier with the crew that we have, they’re enthusiastic and have a great work ethic and I think the players are really responding to the personalities so that’s fantastic.

Within the wider group we’re really looking forward to the gaffer (Rob Penney) coming along. We’ve had skype calls with him, and the philosophies we have and what he wants from a strength & conditioning department seem very much aligned and we’re looking forward to working with him and Simon Mannix.

We’re all working really well together and I’m looking forward to the season ahead."