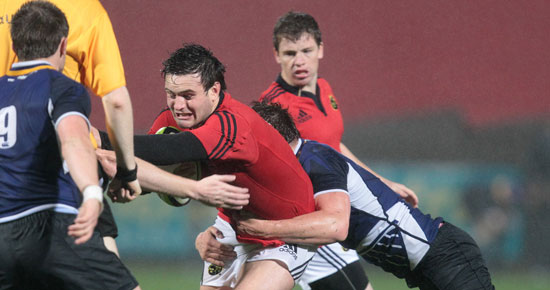 Head Coach Mike Ruddock has named an unchanged U20 side to face France in their final game of the IRB World Cup Championship.

The match will kick off tomorrow, 22nd June (1.15pm Irish time) at the Newlands Stadium, Cape Town and includes Munster players Niall Scannell and JJ Hanrahan in the starting XV with James Rael and Shane Buckley named on the bench.

Both sides will compete for the 5th and 6th spot and Ireland are confident of a victory following their impressive win over England last Sunday.

Speaking ahead of the clash skipper Niall Scannell said "we have had a good tournament to date, although we are obviously disappointed we didn't make the semi-finals. However, we are looking forward to taking on France and we all want to finish in as high a position as possible.”

"France will bring a different mix of physicality and flair. We know it is going to be tough challenge, but we are a competitive team and we are going all out for a victory”.

"We had our first visit to Newlands today. It is a brilliant stadium, the pitch is in perfect condition, and everyone is looking forward to the occasion."

Adding to Scannell’s comments replacement hooker James Rael said "we are really looking forward to playing France at Newlands which is a fantastic rugby arena. The opportunity of achieving the best ever finishing position for an Ireland squad in this competition is a huge incentive and we are all looking forward to the challenge.”

This game will be shown live on TG4.