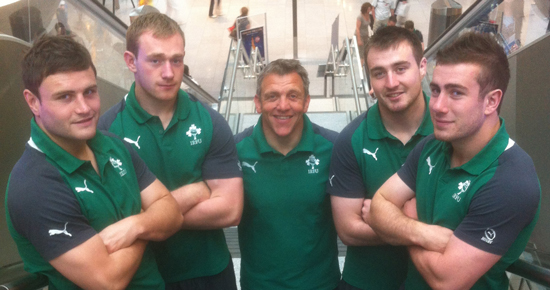 Following a bonus point victory over Italy yesterday in the closing group game, Ireland Under 20s will again face off against old rivals England in the Junior World Cup.

Ireland had to secure a bonus point win against Italy and then wait for the outcome of the South Africa-England match to see if they would advance to the semi finals of the competition.

semi final stage of the competition along with title holders New Zealand, Wales and Argentina.

Reflecting on the permutations of the match assistant coach Greig Oliver said "for a period at the sixty minute mark, we were topping the group, but there was still twenty minutes to go. Unfortunately, the fourth South African try denied us”.

Ireland, captained by Munster's Niall Scannell will take on England on Sunday, 17th June at the University of Western Cape Stadium, Cape Town, (ko 4pm Irish time) to contest the 5th to 8th spot along with France and Australia.

The Irish narrowly lost out to England by a 20-15 margin in their Pool match last week but Oliver is confident his side have gained much experience throughout their World Cup campaign and have significant strength and depth to overcome the Six Nations Champions.

"We managed to shuffle our selection and rest a few of our players for the Italy game. The players involved put in a good overall performance especially in the opening and closing twenty minutes which reflects the strength of this squad”.

“Our movement with pace was excellent at times and that was testament to our work at the contact. We kept the speed of the ball quick and that was something we have worked on, so that was very pleasing for everyone."

"Now we have the opportunity to take on England for the third time this season, so we know a fair bit about them. We have an extra day in this five day turnaround, so we will take time to reflect and then get to work on England."

The squad visit Sizimisele High School today as part of the IRB's Legacy of Goodwill, where the players and coaches will conduct rugby skills sessions.