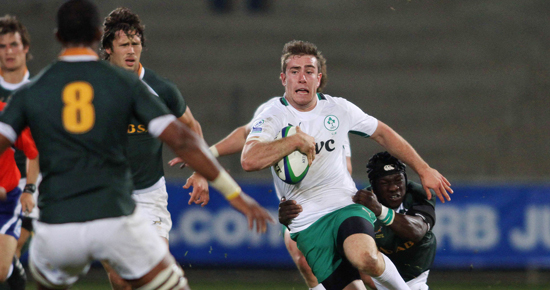 The Ireland Under 20s caused a major upset tonight in the Junior World Cup by coming away with a 23-19 win over host nation South Africa at Danie Craven Stadium in Stellenbosch.

Mike Ruddock's youngsters outshone the pre-match favourites in almost all facets of the game leading to a historic Irish win.

Ruddock called on his talented squad to shock the home side and they duly did, led by man-of-the-match, Munster’s JJ Hanrahan who kicked 13 crucial points and skilfully pushed Ireland forward in open play.

Kerry native Hanrahan converted Jordan Coghlan's 27th-minute opening try to give the visitors a 13-3 half-time lead which was founded on a solid set piece game and muscular defending.

Ireland looked much sharper up to that point, but predictably the South Africans clawed their way back into contention.

A close range try from lock Paul Willemse gave them momentum, while out-half Tony Jantjies was assured from the kicking tee. He converted Willemse's effort and also landed his second and third penalties to make it 16-16 just past the hour mark, with Hanrahan sandwiching in a smartly-taken drop goal.

Ireland skipper, Munster’s Niall Scannell was part of a hugely determined Irish pack and they took everything South Africa could throw at them in a tense final 20 minutes.

Ireland's ability to charge down the home half-backs was a feature throughout this Pool B opener, and one such incident led to a timely second try for Ruddock's side.

Replacement hooker Munster’s James Rael blocked an attempted clearance kick and retrieved possession before being driven up close to the try-line. Iain Henderson picked off the base and fend off two initial defenders and stretched over past a third for an inspirational try.

Hanrahan held his nerve brilliantly to add the conversion from the left and Ireland the benefit of a 23-16 cushion heading into the closing stages.

The Junior Springboks had the better of both possession and territory as they tried desepartely to hit back however a fourth penalty from Jantjies was their only reward.

Ireland stood firm to record the stand-out result of the opening round. They take on England in their next Pool B match on Friday, kick-off 5.45pm. This match will be televised on Sky Sports 2 and TG4.

Scannell To Captain Ireland U20