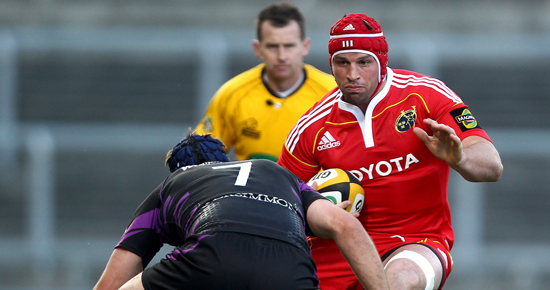 Denis Leamy today became the third Munster player who has been forced to call time on his career this season.

The decision has been forced on the 30 year old because of a hip injury that has this season limited him to three RaboDirect PRO12 games and Munster's four opening games in the Heineken Cup following his return from the World Cup in New Zealand.

Leamy won the first of his 144 Munster caps in September 2001 and played in both the 2006 and 2008 Heineken Cup finals. Capped 57 times by Ireland, he played in two World Cups, was twice a Triple Crown winner and was a member of the 2009 Grand Slam winning side.

Commenting on the news Leamy said, "I find it hard to put into words how much it has meant to me to play for Munster and Ireland. It was a dream come true and I was very lucky to play with some of the greatest players ever to wear the jerseys and feel blessed that I was part of winning teams. "I've had a great career, wish it had gone on a little longer but I'd like to thank all the coaches, players, medical staff and management who have helped me over the past decade. It's been a great honour to be involved with such an outstanding group of people.

"I'd also like to thank the fans most sincerely. I fully appreciate the sacrifices they've made, spending their hard earned cash to cheer us on, be it Munster or Ireland, at home games and all over Europe. Their support has been truly fantastic and a memory I'll carry forever."

Munster Rugby Chief Executive Garrett Fitzgerald said "We are obviously very disappointed that Denis has been forced to call it a day particularly when he is in the prime of his career. An outstanding back-row player throughout his career, I believe his contribution to Munster and Irish Rugby has been inestimable. His fierce determination on the field was mirrored by his work ethic off it and he leaves Munster rugby with our gratitude and best wishes for the future."