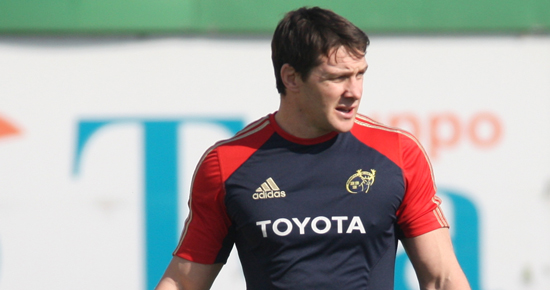 David Wallace today became the fourth Munster player this season to announce his retirement from rugby.

On-going medical issues, as a result of a knee injury sustained in the pre world cup against England, means Wallace has not been able to fully recuperate and regrettably has had to make the decision to retire.

The 35 year old wing-forward won the last of his 203 Munster caps in the Heineken Cup quarter final against Ulster last month. He won the first of those caps in the Interprovincial Championship game against Connacht in August 1997 at the Sportsground in Galway and quickly established himself in the first team.

He made his European debut in September 1998, played in all nine Munster games in the run to the 2000 final where he scored the only try of the game, won a runner-up medal in 2002 and winners medals in 2006 and 2008. He won his 200th cap in the Magners Grand Final last year the last of his 86 Heineken Cup caps in that game against Ulster.

He was also named in the ERC European Dream Team – (Best XV of European club competitions covering 1995 – 2010) along with Ronan O'Gara and Anthony Foley, won a Grand Slam with Ireland in 2009 and as a British & Irish Lion (2001 & 2009) became the first set of three brothers to play for the famous touring side.

Comment: "Although it's disappointing that injury is forcing me to retire now, I take great comfort that I've had an unbelieveably enjoyable career and I feel very lucky to have been involved in an era that has seen Munster and Ireland enjoy so much success".

"Professional rugby has exploded in popularity and changed beyond all recognition in this country since I began and I feel honored to have played witness to it's massive improvement..

I'd like to thank anyone who has helped me and had faith in me during my 15 year professional career including family, teammates, coaches, medics, friends and not least supporters.

I will be looking to step away from rugby and explore a few different business opportunities while also looking forward to being able to spend more time with my wife Aileen and sons Andrew and Harvey."

Deasy In At 10 For Munster