O’Connell In, Earls a Doubt 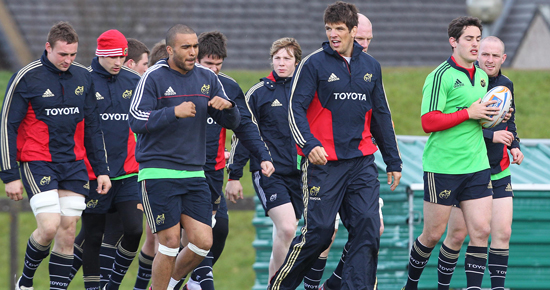 Paul O’Connell seems likely to be involved in Munster’s RaboDirect PRO12 clash with scarlets on Saturday but a doubt remains over Keith Earls.

While O'Connell took part in training at a rain-sodden University of Limerick yesterday, Earls did not but has not been ruled out as yet.

"We hope to have him somewhere in the mix on Thursday," said coach Tony McGahan who will not make a decision until training has been completed tomorrow.

Ronan O'Gara (dead leg) will remain behind but is expected to be fit in time for the final game of the League section against Ulster on May 5th while David Wallace remains sidelined having aggravated the knee injury he sustained in the August international.

Munster complete their preparation tomorrow in Cork before flying to Bristol on Friday.

Kilcoyne Makes A Start For Munster