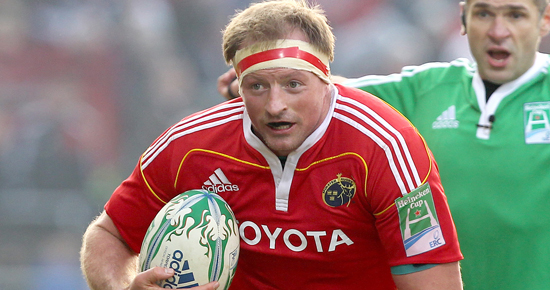 Mick O’Driscoll announced today that he will retire from rugby at the end of the current season.

The 33 year old, who made his debut in August 1998, played his 204th competitive game against Glasgow Warriors on Saturday, contributing handsomely to the 35-29 victory that keeps Munster’s play-off hopes alive.

One of Munster's most consistent performers, O’Driscoll began his career in August 1998 and made his Heineken Cup debut against Neath at Musgrave Park in September of that year. He went on to win 55 Heineken caps for Munster and 7 for Perpignan in the course of a two season stint with the French club.

This season he has played in 17 of Munster's 27 games to date, captaining the side in ten of those games.

He was captain of the side narrowly beaten by New Zealand in the game that officially opened Thomond Park Stadium in November 2008.

O’Driscoll is included in the extended Munster squad named this afternoon for the RaboDirect PRO12 game with Scarlets at Parc Y Scarlets on Saturday.