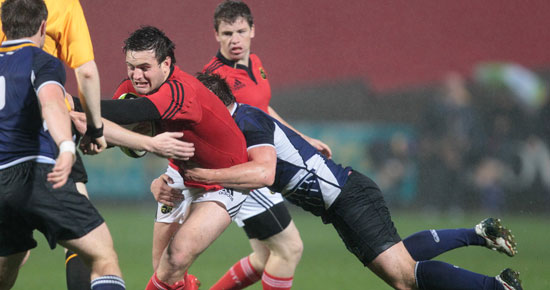 A gritty performance from a Munster Development XV resulted in a hard earned 34-24 win against the fully professional Enesei STM team at Dooradoyle yesterday.

The Russians had beaten Connacht A earlier in the week very comfortably, and came into this game full of confidence. As Munster A had played on Friday night, Munster selected from the Academy and the clubs of Munster.

A half time score of 17-10 was a fair reflection of the game as the Russians had dominated possession and only some disciplined and physical defence held the Russians at bay. The back row of Shane Buckley, John Quill and Liam Og Murphy stood out in the 1st half as they led the defensive line.

Corey Hircock with a try and John Holland with a penalty and conversion got the scores for Munster. Brian Haugh at scrum half kept the tempo of the game up for Munster and was a real live wire at the base.

As the 2nd half wore on the Russians began to tire as Munster upped the ante and kept the ball in hand. Two excellent scores from Hircock and Darren Moroney both converted by Holland put Munster 24-17 in front.

Enesei came back to level with a try from a series of pick and drives, but with James Cronin and replacements Ger Slattery and John Shine prominent Munster finished strongly with a penalty and a converted try all scored by Holland to win by a ten point margin.

What Was Said Afterwards