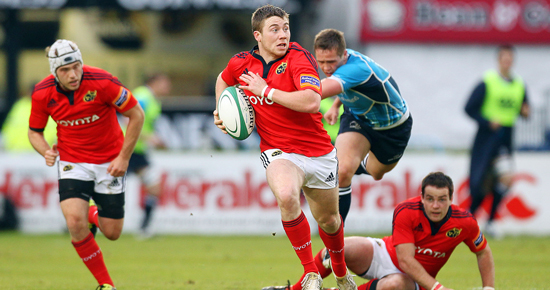 Munster ‘A’ will take on Welsh side Cross Keys in the B&I Cup final on Friday, 27th April in Musgrave Park, ko 5.30pm.

This will be Munster’s second chance to claim the title since their defeat to the Cornish Pirates in the 2010 inaugural final. Munster saw off Leinster last Friday night in a thrilling extra-time semi-final win in front of nearly 5,000 fans at the RDS.

Meanwhile Cross Keys, coached by former Welsh International Mark Ring, became the first Welsh side to make it through to the final of the competition following a 20-16 semi-final victory over the Cornish Pirates.

Commenting on last Friday’s win over Leinster, Head Coach Ian Costello said “we were delighted with the result in the RDS, especially with the character and work ethic shown by the players to come back from 20-9 down with a man in the bin. It was also especially pleasing to finish in such a strong manner after 100 minutes of rugby against quality opposition”.

“We are looking forward to the final against Cross Keys who are having an excellent season in the B&I Cup campaign and will no doubt provide another huge challenge for our players. We would be hoping for a large turnout of Munster supporters on the night to create a special atmosphere in Musgrave Park for the final."

The entry fee for the final is €;10 per adult and €;5 per student/OAP. There will be free entry for Munster Supporters Club season ticket holders.

This match will be covered live on Sky Sports from Musgrave Park.