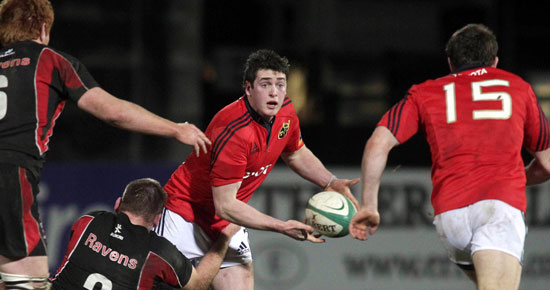 Three of the four home nations are represented in this year’s British & Irish Cup semi-finals that kick off on Friday night when Munster travel to play Leinster in the RDS (6pm).

The prize for the winner of that tie is a home final against either competition newcomers Cross Keys, flying the flag for Wales or English outfit Cornish Pirates, who defeated Munster in the inaugural final.

Friday evening’s semi-final sees the ‘A’ sides of Irish provinces clash for only the sixth time at this level of rugby. Munster marginally have the better head-to-head record over the last decade by three wins to two, including victory in the last meeting: 19-7 at Donnybrook on September 12, 2010.

Munster A have only been beaten once in seven outings this season, their only defeat coming against Cornish Pirates, 10-6 on November 11, 2011.

Leinster are bidding for a first-ever appearance in the final having progressed to this stage with a comprehensive 32-0 home win against Pontypridd in the quarter-finals.

A second final appearance in three years awaits Pirates if they can get past Cross Keys in Saturday’s semi-final at Pandy Park. Pirates are the only team in the line-up to have won all four of their pool matches, securing their path to the semi-finals with a win over fellow Championship contenders Nottingham.

But Cross Keys have impressed in their first season, finishing top of Pool 2 just one point ahead of Munster 'A' before victory against Welsh Premiership rivals Llanelli saw them through to the last four.

Pirates go into the fixture having won back-to-back games against Rotherham in the Championship play-offs, while Cross Keys have lost two of their last three games in the Welsh Premiership to sit fifth in the table.

No Concerns Over Earls