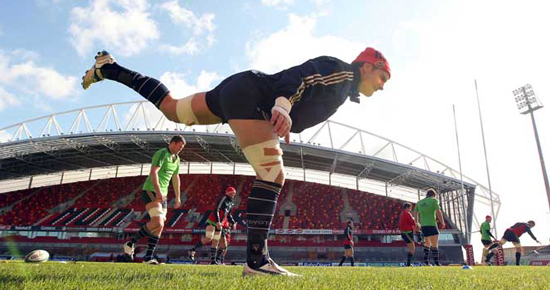 The Munster squad and management gathered today in Thomond Park for training ahead of the much anticipated Heineken Cup quarter final clash against Ulster on Easter Sunday.

As the countdown has begun and with four days to go for the big game we are calling on all our supporters to get behind the team by turning Limerick city red.

Similar to last weekend the water in the O’Connell Monument will be coloured red and Munster flags will fly on Limerick city bridges and on key buildings in the city centre.

Thousands of Munster flags and face tattoos will be distributed to fans in Limerick city on match day and bands will perform at entertainment hotspots en route to the stadium.

The entertainment will continue into Thomond Park where Ireland’s folk band of the year The High Kings (Brian Dunphy, Martin Furey, Darren Holden and Finbarr Clancy) will be performing from 12.45pm. The MRSC choir will also perform along with the highly acclaimed Cara O’Sullivan.

Be in early to soak up the atmosphere and wave your Munster flags to ensure that the Munster team run out to a sea of red!

Video: Costello Prepared For Task Ahead