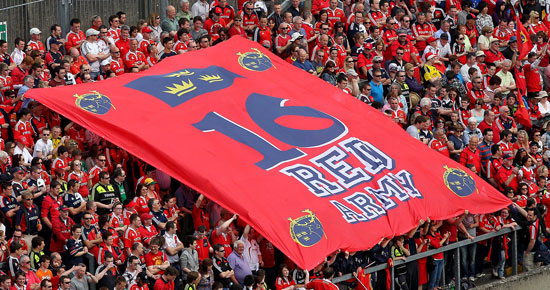 The Munster Rugby Supporters Club is now open for new membership and Munster are calling on you to show your support by joining the Red Army.

Sign up to the Supporters Club for €;30 and receive the following member benefits for season 2012/13:

A full list of benefits can be viewed here.

The Munster Rugby Supporters Club has grown year on year since it’s inception in 1999 and now has almost 12,000 members. The MRSC plays a vital role within Munster Rugby having already contributed over €;600,000 to the Munster Academy over the last five years. Funding from the Supporters Club assists with the development of the Academy and also provides funding to Munster Rugby for various projects such as the team's gym facilities, video analysis equipment, flags on match day and much more.

The club is open for membership during the month of April only.
Don't miss out on your chance to be the 16th man!
The MRSC look forward to welcoming you to the Red Army!