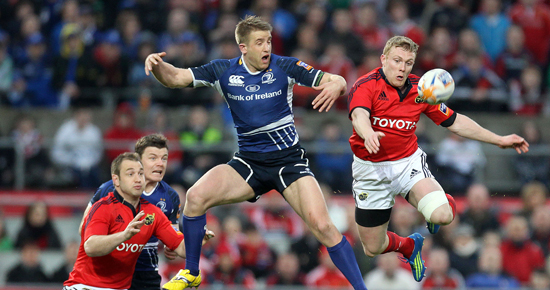 Leinster increased their lead in the RaboDirect PRO 12 table by overcoming Munster in Thomond Park tonight in front of a full stadium.

Two more penalties from Sexton put Leinster in a 9-3 lead going in at half time.

Things looked up for Munster in the second half as O’Gara brought the score level again following two successful penalties in the 45th and 53rd minute.

Munster failed to get ahead and two further penalties from Sexton and substitute Fergus McFadden increased the Leinster lead 15-9.

There was no way back for Munster as a well struck drop goal from Ian Madigan in the 74th minute put the game away for the visitors which finished 18-9 at the final whistle.

Video: Zebo Up For The Leinster Challenge

Cup Rugby From Here On In.