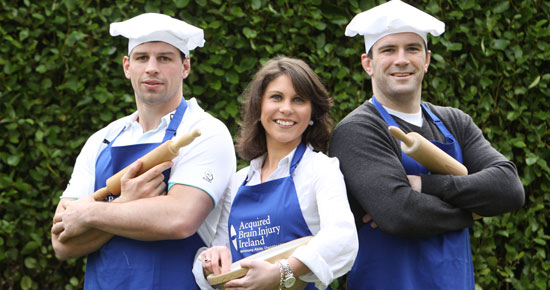 The ‘Bake for Brain Injury’ campaign is an annual fundraiser developed by ABI Ireland in an effort to raise much needed funds for those living with an Acquired Brain Injury.

It has been estimated that over 13,000 people are affected by an ABI each year in Ireland. Men are three times more likely than women to acquire a brain injury, and young men in particular between the ages of 16 – 25 are at high risk.

One of Munster Rugby's charities of the year, Acquired Brain Injury Ireland provides vital support services to enable people with ABI maximise their abilities. The not-for-profit organisation also works to reduce the number of people affected by the injury, by raising awareness of the causes of ABI. Their education and prevention campaign ‘Mind Your Head’ is successfully focusing on shining a light on the growing ‘silent epidemic’ that is brain injury while also educating society about more subtle mild brain injuries that occur, such as concussion in sport.

Speaking at the launch Leamy said "We all love playing sport and we all want to give one hundred per cent to our club, our province or our country. Wearing a scrum cap while plaing rugby, a helmet when playing GAA or whatever protective headgear is available to you is an easy way to look after your well being on the pitch and your future".

For more information, and to register for a bake receiving your free baking pack please visit www.abiireland.ie

No Changes For Ireland