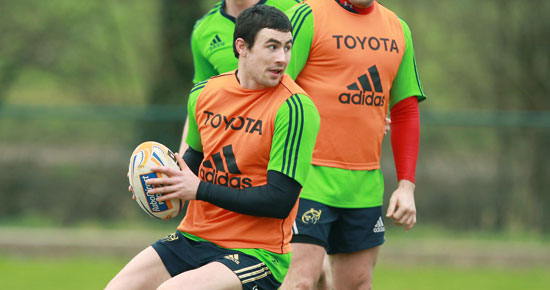 Munster coach Tony McGahan makes five changes, from the side that started against Treviso, for tomorrow’s RaboDirect PRO12 clash with Cardiff Blues at Thomond Park Stadium (7.05).

Four of those – Ronan O’Gara, Donnacha Ryan and Peter O’Mahony – are a direct result of the international the following day, all featuring in the match day squad for the game against Italy. Denis Hurley is called up as cover (24th man) while Marcus Horan gets the nod over Wian du Preez at loose-head prop.

The absence of Hurley affords McGahan the opportunity to re-install Felix Jones at full-back, Jones looked sharp when he came on as a 60th minute replacement in Treviso and Tommy O’Donnell who returned from injury in the 68th minute of that game, takes over on the openside from O’Mahony.

Ian Keatley who missed out on the trip to Italy after twisting an ankle, wears the number 10 shirt and Billy Holland operates alongside skipper Mick O’Driscoll in the second row