Munster Catch Up With JJ Hanrahan 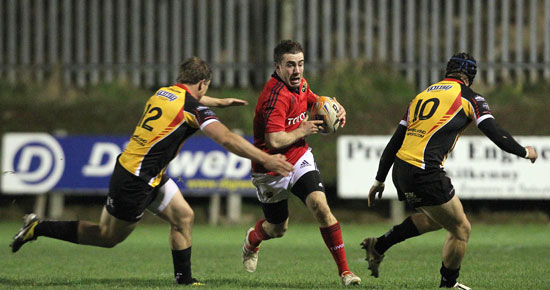 We catch up with Munster’s JJ Hanrahan as he looks forward to the Munster ‘A’ head to head clash against Leinster in the B&I Cup semi-final in Dublin on Friday, 6th April.

In his second year with the Munster Academy, 19 year old JJ Hanrahan made his senior debut against La Rochelle

Hanrahan, who plays outhalf/centre is currently involved in the Ireland U20 six nations squad that achieved a historic win over France in Grenoble last Saturday putting them on course for a championship title.

Originally from Kerry, Hanrahan played his schools rugby with Rockwell College and represents UL Bohemian RFC at club level. Having made his debut in the B&I Cup competition last year, Hanrahan is hopeful the Munster ‘A’ side will go on to compete in the first final of the competition to be played in Ireland on Saturday, 28th April.

How old were you when you first started playing rugby and what club: I was 7 when I started in Castleisland RFC

First position you ever played: Prop – I think – because I wore a scrum cap

Most memorable try in career: Rockwell College v St. Munchin’s in the Schools Senior Cup. I got two that day and haven’t scored since!

Most difficult opponent: All the South African U20’s!

Most embarrassing moment on a rugby pitch: In a school’s game, kicking ball out over the line and cheering thinking we had won, and everyone started laughing at me because we lost.

Player you would most like to play alongside: Dan Carter

Best thing about playing for Munster: Living a dream

Best part of being a pro rugby player: Doing something you love for a living

Worst part of being pro rugby player: Not being able to travel with friends

Sportsperson you admire most: Michael Jordan

Sporting event you'd most like to attend: The Super Bowl

Where you haven’t been and would love to go to: California/Thailand

What you see yourself doing when your rugby career over: Something in business

Who would play you in a movie: Brad Pitt- we’re very similar!

Person you would most like to meet: Michael Jordan

Subject you were worst at: Irish

Three people you would invite to dinner and why: John Bishop (for the laugh), Tiger Woods (to get all the gossip), Mila Kunis (to ask her to marry me!)

In Pics: Munster Training In CIT