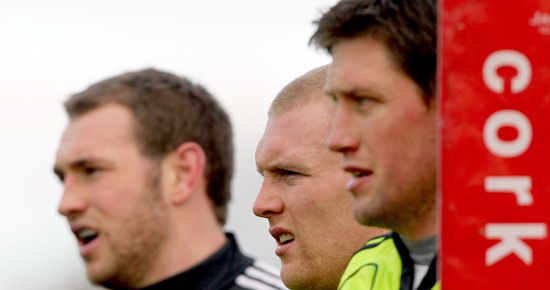 It’s an ill wind that doesn’t blow some good although perhaps a heavy frost would be more appropriate in the circumstances given that the cancelled RBS Six Nations game last Saturday means Munster travel to Italy on Thursday stronger than they might have anticipated.

The original two day international camp in Belfast has been cancelled, with a shorter one day camp taking place in Carton House, outside Maynooth (Co Kildare) on Wednesday, 15th February.

A squad of 30 players will gather in the camp after which all of the players, with the exception of the starting XV that were selected to play France, will be released to their provinces for game time in the RaboDirect Pro12.

That means that Ronan O'Gara, Donnacha Ryan and Peter O'Mahony will all be on the early am flight that lands in Stanstead before the onward journey to Treviso.

It would also seem likely that Keith Earls, who was selected to play against the French, having missed the Welsh game, would also be in the squad for Munster's re-entry into RaboDirect PRO12 action.

The squad to travel is expected to be named tomorrow after training in Cork.

Jones Comes Through First Game Back

Borlase On Loan To Connacht