Jones Comes Through First Game Back 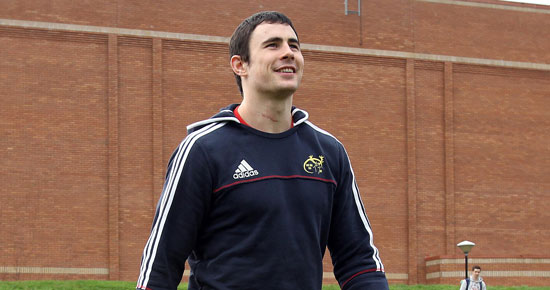 Felix Jones made a sucessful return to action lining out for Shannon in their game against Young Munster last Friday night.

Jones who had been sidelined since injuring himself in the August international against France, played 80 minutes on Friday and after wards declared himself, 'delighted' with the run.

He was in in UL this morning training with the Munster squad ahead of their RaboDirect PRO12 game against Treviso in Italy next Saturday although he refused to say whether or not he'll be involved in the squad that travels for that game.

Also training today were Ronan O'Gara, Keith Earls, Peter O'Mahony and Donnacha Ryan and given the fact that they've all been short of game time there must be the likelihood of them being included in the Munster squad for Saturday.

It was a good weekend for Munster players involved in the All Ireland League. Ronan O'Mahony scored a try and Declan Cusack produced a Man of the Match performance against Lansdowne in Dooradoyle, Cusack scoring 18 of their 38 point total while Scott Deasy and Ivan Dineen each scored a brace of tries in Cork Con's 43-6 rout of Blackrock in Temple Hill, Sean Scanlon also among the try scorers.

Denis Hurley scored a try in UCC's one point win over Ballynahinch and Dave Kilcoyne's try also proved crucial for UL Bohs who also won by the narrowest of margins against Buccaneers in Dubarry Park.