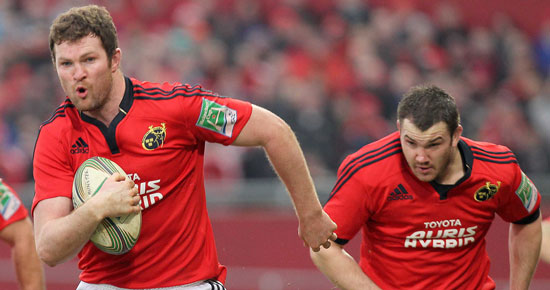 The Ireland management have named a 32 man squad including 9 Munster players as preparations reach their final stages for Ireland’s opening game of the 2012 RBS 6 Nations Championship against Wales on Sunday, February 5th.

The majority of the squad that trained in the Limerick camp last week have been retained and there are also call ups for O2 Ireland Wolfhound players Denis Hurley, Dan Tuohy, Chris Henry and Rhys Ruddock, all of whom have been capped previously for Ireland.

Munster's Simon Zebo and Peter O’Mahony are two of five uncapped players in the squad to join up with the senior Ireland squad in Kildare.

Hanrahan & Scannell On Ireland Under 20s