Near Enough As You Were 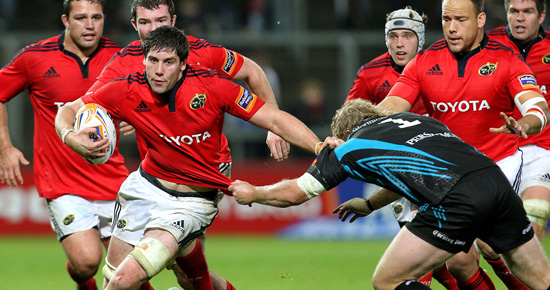 Munster make just one change in personnel to their starting XV, from the one that started against Castres Olympique, for tomorrow’s Heineken Cup clash with Northampton Saints (6pm).

Injury to Niall Ronan forces a reshuffle in the pack where Donncha O'Callaghan, Ronan's replacement after 14 minutes will partner skipper Paul O'Connell. Donnacha Ryan moves from lock to blindside flanker while Peter O'Mahony, who started at six against Castres, takes over on the openside from Ronan.

Otherwise it's a case of as you were in the starting XV but on the bench there's a first time inclusion in a Heineken Cup match day squad for Dave O'Callaghan while the ever reliable Mick O'Driscoll, with 196 Munster caps under his belt, makes his first appearance of this Heineken campaign on the bench.

Meanwhile, it's being speculated that neither Tom Wood nor Chris Ashton will feature when the Saints name their side in a little while. Wood is understood to have injured a toe while Ashton is reported to have fallen out with his coach Jim Mallinder.

Ashton is set to jump ship at season's end and sign up with Saracens.

Munster flew out from Shannon Airport this morning on an 11am Aer Arann Charter for Luton Airport where they're expected to arrive at 12.30 and transfer to their team hotel in Milton Keynes