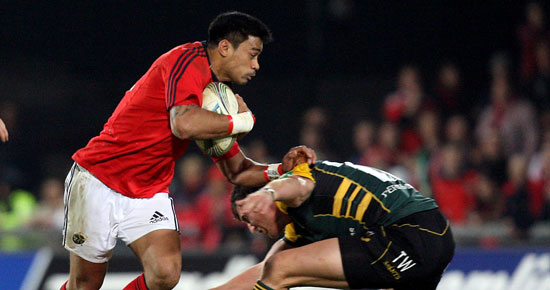 Northampton Saints has issued the following advice to all supporters in respect of ticketing, car parking, public transport and entertainment on the day.

Please note the stadiumMK turnstiles will open at 3:30pm.

Tickets for the match are now SOLD OUT.

The stadiumMK box office will be open on Saturday, January 21st from 9am for ticket collections. However all supporters must note that there will be no ticket reprints on the day of the game.

Northampton Saints have confirmed that there is no public car parking in the official stadium car parks. There are around 3,500 car parking spaces in the industrial estates on either side of the stadium, around five minutes’ walk away.

Supporters are advised to allow plenty of time to get to the stadium on the day of the match. Northampton Saints politely requests supporters to park their cars with due regard to residents and businesses in the area surrounding stadiumMK, and must confirm that the club will have no liability for any measures taken by any of the aforementioned residents and businesses towards impeding vehicles.

There are no engineering works planned for the West Coast Main Line, so as it stands London Midland are expected to run a normal Saturday service between Rugby, Long Buckby, Northampton, Wolverton and Leighton Buzzard to Bletchley and Milton Keynes Central.

There are taxi ranks at both Bletchley and Central Milton Keynes train stations.

Arriva Buses have one service, the number 1, which runs from Central Milton Keynes to stadiumMK. The service runs at five minutes and 35 minutes past the hour with the journey time lasting approximately 10 minutes. There are a number of other bus services between Central Milton Keynes and Bletchley which will all have stops within a few minutes’ walk of stadiumMK. For more information visit www.arrivabus.co.uk/mk

Munster supporters are invited to the The Rodber Suite at Franklin’s Gardens which will be open from 1:30pm with the day’s first game between Leinster and Montpellier being shown on the large high definition screens.

A matchday Village will be open for all supporters next to the arena at the southern (Asda) end of the stadium. This will feature a beer marquee and hot food vendors as well as face painting and fun and games for the youngsters. The Village also opens at 3:30pm.

Club Red (between Aisles 22 and 23), with bars and a hot food counter, will also have a giant screen showing the afternoon’s other big match from Welford Road between Leicester and Aironi, and will be open to all supporters. Club Red is only accessible from the stadium concourse; supporters must enter via the turnstile shown on their ticket.

The match will be replayed in Club Red for supporters who wish to stay on.

Supporters must also note that once they are in the stadium they will not be able to exit until the end of the game or for an emergency situation.