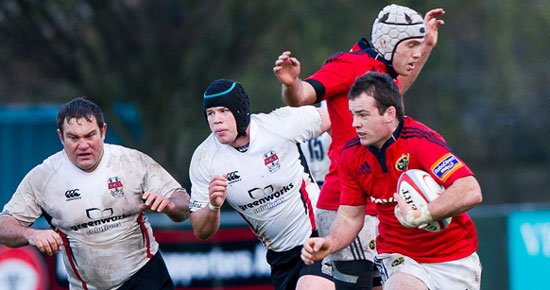 The Munster ‘A’ squad held a training session in Limerick today in advance of their knock-out stage B&I Cup fixture against the Ulster Ravens in Ravenhill this Firday night, ko 7.30pm.

Munster Rugby caught up with Head Coach Ian Costello who went through the preparations and squad selection for this must win encounter. “As everyone is aware there has been a significant number of injuries within the senior squad, which has a knock on effect on the ‘A’ squad. A number of players who played in the group stages of the B&I Cup will not be available for the quarter final, either through injury or promotion to the Munster Seniors. This presents us with an opportunity to expose more Academy and Development players at this grade and test them at a higher level than they will have played in the past.”

Costello went on to say that preparations for the quarter final have been going well. “Despite the focus being on the Heineken Cup games we have managed to get some quality training time together as a squad.”

were undefeated in their four pool matches of the competition. When asked where the Raven’s team is particularly strong Costello replied “Ulster Rugby in general is on a high at the moment and the Ravens side have been unbeaten in this competition so far. There is a lot of talk about the quality of the players they have coming through their system and playing in Ravenhill is such a huge motivating factor for them”.

Nevertheless, Munster ‘A’ will be focussing on their own preparations. With reference to their own path to the quarter final stage Costello acknowledged “It has been an extremely tough qualifying campaign and we have had to produce some excellent performances to make it this far. We have a talented squad with an excellent work ethic and energy that they bring to each game and we are looking forward to a tough match in Ravenhill this Friday.”

As Munster Rugby focus on the development of age-grade players right through to Academy and Senior level, Costello considers the B&I Cup to be an excellent competition for the development of Munster players. “In the past three seasons our young players have been exposed to a higher standard of competition that prepares them to make the next step up to RaboDirect PRO12 rugby.” He went on to say that “travelling out of Ireland to play seasoned teams like Neath, Nottingham, Bristol and Cornish Pirates, with a different style and culture of rugby is an invaluable experience for our players. One of our key objectives is to produce players for the Senior team which has come to fruition in recent seasons through the likes of Conor Murray, Peter O’Mahony, Mike Sherry, Simon Zebo and Danny Barnes, all now regular Heineken Cup players”.

The grandstand and promenade side of the ground in Ravenhill will be open for Friday’s match and tickets are priced at £10 adult and £5 child for anywhere in the ground.

Ronan Out Of Milton Keynes Trip