Munster Catch Up With Luke O’Dea 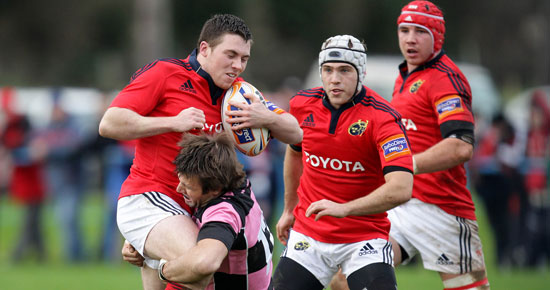 The Munster ‘A’ Squad will travel to Ravenhill this Friday, 20th January , kick-off 7.30pm, to take on the Ulster Ravens in the quarter-final stage of the British & Irish Cup.

We catch up with Munster ‘A’ winger Luke O’Dea in advance of this knock-out fixture.

Book you are currently reading or have just finished:
Game of Thrones

Marooned on a desert island what could you not be without:
Book

Person you would most like to meet:
Cathal Quinn

Sportsperson you admire most:
Michael Jordan

Where and when did you first play rugby:
Moseley, England – 1997

Biggest influence on career:
My Dad

Best career advice you were given:
Fail to prepare, prepare to fail

What you like least about being a rugby player:
Missing out on birthdays and occasions

Other sports that you played:
Soccer, Gaelic Football and Hurling

Rugby team you admire the most:
All Blacks

Sporting event you would most like to attend:
Super bowl/NBA finals

If you weren’t a rugby player what would you be:
Army Pilot

Three people you would invite to dinner and why:
Will Farrell (for the laughs), Pixie Lott (for the looks) and Niall Mangan (nice guy)

Still Work To Be Done