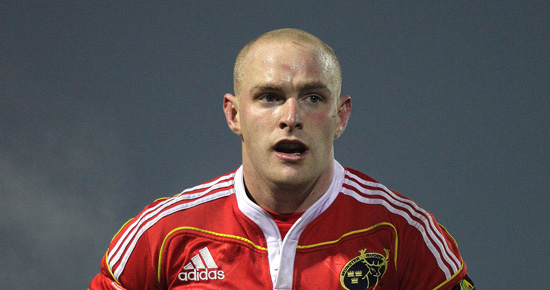 Notable absentees are Jerry Flannery, David Wallace and Felix Jones, all front-line players ruled out through injury sustained while preparing for or participating in the Rugby World Cup.

Because of front-row injuries, John Hayes has been included for the pool stages of the competition. Darragh Hurley and Peter Borlase – both of whom are expected to resume full training in the coming weeks – could come into the squad after ERC Round 1 and 2 under ERC regulations, as is the case with Flannery.

Neither Wallace nor Jones would be available to take any part in the pool stages.

21 year old Youghal native Dave O'Callaghan (Dolphin), a former Ireland Youth/U20 international, made his first appearance for Munster in the August 2009 pre-season friendly against Sale Sharks and his first competitive start against Ospreys in the RaboDirect PRO12 game earlier this month.