Ireland Through To RWC Quarter Finals 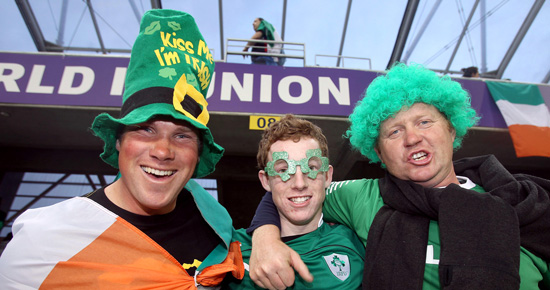 Ireland are through to a RWC quarter final clash with Wales by virtue of their 36-6 win over Italy in Dunedin today.

Ireland are through to a RWC quarter final clash with Wales by virtue of their 36-6 win over Italy in Dunedin today.

They led 9-6 at half times thanks to the unerring boot of Ronan O'Gara and twenty seven unaswered second half points that included a brace of tries from birthday-boy Keith Earls saw them run out convincing winners over a totally outplayed Italian side.

The Italians were competitive enough in the opening half not surprisingly using their pack to gain momentum but lost that edge when prop Martin Castrogiovanni was forced off injured in the 35th minute.

They might have gone in at the break tied nine points apiece when Ireland were penalised for an infringement at an impressive Italian maul but the penalty was reversed after Mauro Bergamasco was seeing slapping Cian Healy.

O'Gara kept the scoreboard ticking over with a 44th minute penalty as indiscipline crept more and more into the Italian's game and the outcome was put beyond doubt as early as the 52nd minute when Earls scored his try, five minutes after Brian O'Driscoll had scored a real gem created by Tommy Bowe.

The Italians never looked likely to make a come-back. It was 32 minutes into the second half before they got within anything resembling a threatening rumble at the Irish line. Impatience and dogged Irish defence denied them and allowed  replacement Donncha Ryan snatch possession, the ensuing penalty award allowed them clear their lines.

Replacement Andrew Trimble made the space for Earls to score his second try and another replacement (67th minute for O'Gara), Jonthan Sexton, added the conversion from close to the left touchline.