Munster Take To The Road 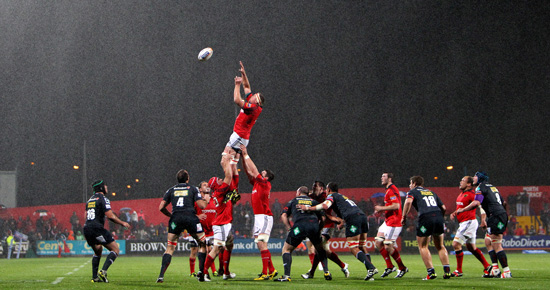 Munster take to the road for the next two games beginning in Cardiff next Friday where they take on the Blues and the following weekend it’s off to Scotland and the clash with Michael Bradley’s Edinburgh Gunners.

Munster take to the road for the next two games beginning in Cardiff next Friday where they take on the Blues and the following weekend it’s off to Scotland and the clash with Michael Bradley’s Edinburgh Gunners.

They trained this morning in UL where Forwards coach Anthony Foley expressed his satisfaction with Saturday's performance against Scarlets.

“We were delighted with the outcome.” he said. “Ok, at times it was sloppy. At times we lost our flow. At times we didn't play the way we'd planned. But look, you can't always get it spot on much as you'd like.”

“Everyone strives for perfection and fluid play but unfortunately when conditions deteriorated to the state they did in the second half the ball became a bar of soap and that made things very difficult.”

Once again there was much to like about the younger generation, two of whom, Duncan Williams and Tommy O'Donnell scored tries while Dave Foley was impressive particularly in the line out. “As I said before, there's a good mindset, there's a good attitude in the side. They don't give up. They don't give anything to the opposition without them having to earn it.” Foley said.

“For the young lads they're learning their trade and applying their trade very well out there. If you judge them off the first three league games you'd have to be impressed. But we want more. We're kinda selfish in that manner in that we want bigger performances from these guys. And by demanding more in training and by them being self critical hopefully we can push it on to another level.”

“It's still early days. Cardiff's a tough place to go. They're a very good club, a very good side. We've always found it hard to go over there and win. Last year was something of an unusual event in that we won over there. We're three from three, start of the season. We'll go over there, do our best and see where it leaves us.”

Turning his attention to events down under, Foley's face brightens. “The whole country is over the moon. I suppose everyone that knows the lads involved and the coaches that what we were seeing in their warm-up games and against the USA wasn't their form. Everybody knew there was a big game in them. It was great to see that performance. It lifted the whole nation.”

And now that gloom has been lifted the expectations heighten. “Look we gotta keep it all in perspective.” he cautions.

“Now they're in a totally different position where the Russia game is important to win and then the most important thing is to have 22 fit bodies to play the Italians.  And the Italians are going to bring a massive physicality to the game which we have to be ready for.”

“There's a load of factors to be considered. The conditions have to be managed. How much training, how much game-time you expose some of your leading lights to.”

“With the expertise Declan has around him and his own experience I think they're well equipped to look after themselves.”