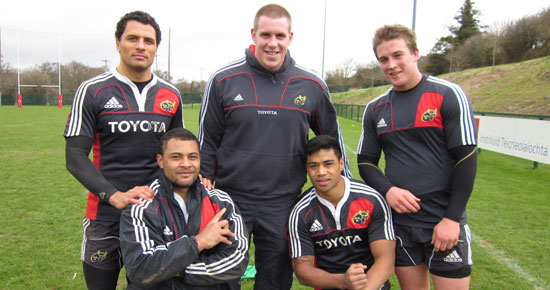 Munster Rugby’s New Zealand players will show their support for a Coffee Day to be held in Cork next Wednesday March 16th in aid of the Christchurch, New Zealand Earthquake Appeal.

Munster Rugby’s New Zealand players will show their support for a Coffee Day to be held in Cork next Wednesday March 16th in aid of the Christchurch, New Zealand Earthquake Appeal.

The Coffee Day will start at The Bowery, Tuckey St., then move to Cafe Depeche and the Bru Bar & Hostel, both on McCurtain St., and end the evening back at The Bowery.  The day will also give people the chance to experience some New Zealand food, culture & drink at the different venues.

There will be an auction and raffle held on the day to raise funds for the appeal, and Munster Rugby's Peter Borlase, a native of Christchurch, has led the support by securing great prizes such as signed Munster jerseys, signed gear from current All-Black and Crusader Sonny Bill Williams as well as his centre partner Robbie Fruean, signed jerseys from Leicester Tigers, London Irish, Newcastle Falcons, Ospreys, Cardiff Blues, Clermont Auvergne and other European rugby clubs.   Munster's own All-Black star Doug Howlett has also contributed signed boots to the prize fund.

Borlase and Howlett will be joined by fellow team-mates Lifeimi Mafi and Sam Tuitupou in the evening at Cafe Depeche, McCurtain St. and there will also be a live feed back to New Zealand TV which will give Kiwi’s living in Ireland an opportunity to offer best wishes and encouragement to those affected by the earthquake.

There will be a 5 euro entrance charge which will also include complimentary coffee and snacks, and all money raised on the evening will be donated to the Christchurch, NZ, Earthquake fund.

The day is open to everyone, especially coffee lovers, and the New Zealand community of Cork would appreciate all support on Wednesday March 16th.

If you wish to support and are unable to make it on the day, donations can be made to the Irish Red Cross bank account making specific reference to the New Zealand Earthquake Appeal.