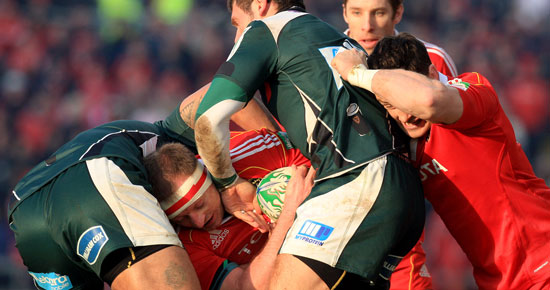 A final quarter attack yielding three tries gave Munster a 28-14 victory against London Irish in their last outing of the 2010/11 Heineken Cup today.

A final quarter attack yielding three tries gave Munster a 28-14 victory against London Irish in their last outing of the 2010/11 Heineken Cup today.

With no score at halftime it was Varley who got the first points of the afternoon after 46 minutes, before London Irish took the lead going into the final 10 minutes after two successive tries from Mapusua and Tagicakibau.

Irish were reduced to 14 men after number 7 Jamie Gibson was yellow carded and Munster capitalised on the numbers advantage with tries from Niall Ronan and Keith Earls and finally Darragh Hurley on the 80th minute to not only seal the victory but also claim a bonus point which could prove vital for Amlin Challenge Cup qualification.

Captain Denis Leamy commenting on the come-back  “That shock really snapped us into gear and we showed great intensity and great focus when we had to.  I thought the way we responded was a massive positive.”