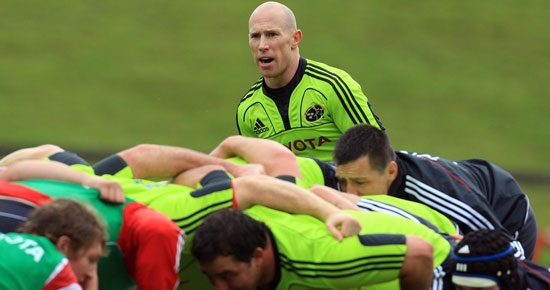 Peter Stringer will win his 200th competitive Munster cap on Friday night in Ravenhill in the Magners League round seven clash with Ulster.

Peter Stringer will win his 200th competitive Munster cap on Friday night in Ravenhill in the Magners League round seven clash with Ulster.

Stringer is just one of eight who retain their position from the Benetton Treviso game as Munster give first starts to Ivan Dineen in the centre, Academy contracted  hooker Mike Sherry and Development player Ian Nagle in the second row.

There are two Academy players, hooker Sean Henry and wing Simon Zebo named on the bench alongside Development contracted Stephen Archer and Peter O'Mahony while Barry Murphy makes a welcome return to the Munster squad after a long lay-off through injury.

Doug Howlett will captain the side.