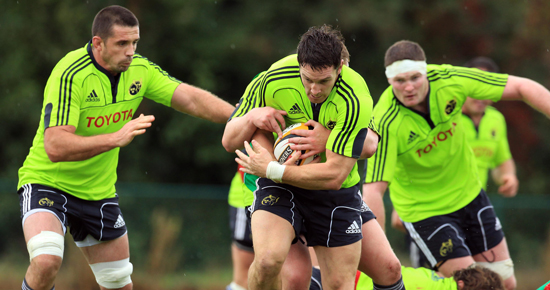 Munster coach Tony McGahan has named a 29 man squad for the Magners League clash with Leinster at the Aviva Stadium on Saturday (7.30pm).

Munster coach Tony McGahan has named a 29 man squad for the Magners League clash with Leinster at the Aviva Stadium on Saturday (7.30pm).

McGahan supervised his squad's session in the pouring rain in Cork Institute of Technology this morning and afterwards at the media briefing in McCarthy's Tennis Village expressed his unconcern when asked if  the predicted wet weather for Saturday's game would have any effect. “Not at all, whatever the conditions both sides will adapt, it'll be the same for them. Obviously, we'd like a dry sod, I'm sure supporters would too. But it's not as though either ourselves or Leinster are not used to playing in the wet.”

He went on to say “We expect Leinster to be at their best on Saturday, and you can’t argue with history and with the stats but this game will be judged on its own merits. It’s always a motivation when you lose to any side.”

Tomás O’Leary looking to Saturday's game, “It’s a league game, four points on offer and hopefully we can get them. There’s no talk of revenge, it’s a fresh season and neither side are satisfied with last season and we certainly want to improve anyway. You have to be on top of your game to compete against Leinster, especially up in Dublin.”

Denis Leamy added “I think we have gained a lot of confidence from winning so far which is one thing, and obviously our scrum is one area we have improved on and we have more to do with it. But right across the board we have improved and there’s a bit more to come hopefully. Physicality will play a huge part against Leinster and whatever has gone before doesn’t really matter, this is a derby game, we know each other so well, and it’s one of those great games to be involved with in Irish sport.”

On the injury front McGahan gave an update on Keith Earls, “We hope he will be participating in training at the end of this week, with 2 to 3 weeks for a return to game time. We would hope Jerry Flannery will be the same, in training by the end of the week, and follow a similar timeframe to Earls.”

“Ian Dowling will be out of action for three months and Felix Jones looks like five to six months but we will find out more as we go on.”