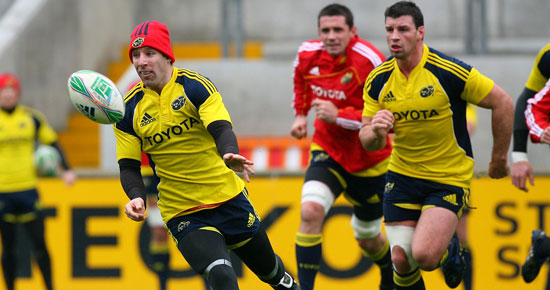 Seven of those who represent tomorrow’s League finalists are included in the Magners League 2009/2010 Dream Team.

Seven of those who represent tomorrow’s League finalists are included in the Magners League 2009/2010 Dream Team.

It's probably the debate that these exercises generate that makes them so fascinating and in Irish terms, Leinster have the biggest representation with three players, Brian O'Driscoll, Leo Cullen and Jamie Heaslip, Munster one, Tomas O'Leary, while there's no Ulster or Connacht player selected.

O'Driscoll earns his selection on the back of just seven starts out of 18 games while O'Leary, Adam Jones and Gethin Jenkins squeeze in having both started eight matches. Heaslip takes the number 8 slot pipping Xavier Rush apparently by one vote, the Leinster man started in nine games, Rush fifteen times.

Munster's recently elected Player of the Year Mick O'Driscoll fails to make the side, Cullen and Ali Kellock preferred, even though O'Driscoll started in fifteen  of Munster's games as opposed to ten by the Leinster lock.