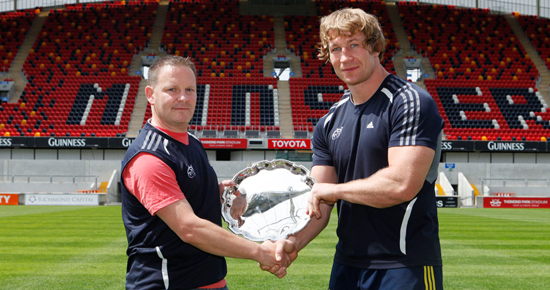 Munster’s average ticket sales for Magners League matches between Thomond and Musgrave Park topped 18,600. That represented a 4% increase on the previous season, when Munster won the title.

Crowds for the 18 rounds of regular Magners League matches topped the three-quarters of a million mark for the first time ever at 771,852, representing an increase of 5.5% on last season.

It means that average gates now stand at 8,576, more than double the average of 3,802 recorded in the 2003/4 season when home and away games in the league first began.

Director of Celtic Rugby, David Jordan said; “Congratulations must go to Munster on ending another season as the Magners League’s Best Supported Team. The loyalty of their fans in renowned throughout Europe, and the support they give their team is outstanding.

“Almost all Magners League teams have recorded an increase in their gates this year; Glasgow Warriors by nearly 28%, Cardiff Blues 25%  whilst Connacht have seen an 8% increase. This is a remarkable achievement in a year of economic turmoil, travel chaos and weather interruptions.”

Michael Merrins, Managing Director, Bulmers Ireland added: “We would once again like to offer our congratulations to everyone at Munster. To win this award for a second year in a row reflects the continued hard work put in both on and off the field, along with the passion and loyalty of Munster’s fantastic fans.”