Munster Through To Semi Final 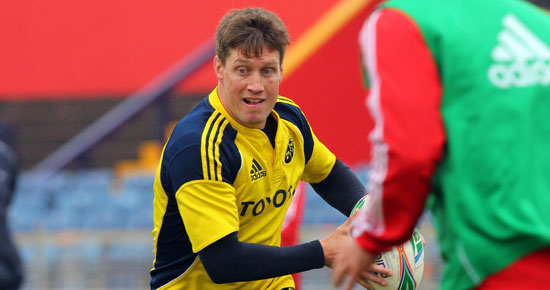 A late Leigh Halfpenny long range penalty denied Munster victory in Cardiff but they still qualify for the semi finals in a week’s time.

A late Leigh Halfpenny long range penalty denied Munster victory in Cardiff but they still qualify for the semi finals in a week’s time.

Munster led 12-10 at the break and produced an impressive second half display to richly deserve the necessary point that sees them through to a semi-final meeting with Leinster in Dublin next Saturday evening.

Ronan O’Gara played a captain’s role, besides his accuracy from the tee, regularly pinning the Blues back with raking touch finds or on the money garryowens.

He looked to have created the only try of the second half when he breezed through the Blues defence before sending Jean de Villiers on his way but to the surprise of most was whistled back for a forward pass.

When Munster lost possession after a scrum under the Cardiff posts, the home side exacted the ultimate sanction when Jamie Roberts crashed over on the right despite the effortsof Nick Williams. Blair added the conversion but two further O’Gara penalties kept in touch until injury time when O’Gara was again on the mark to edge Munster in front 12-10 at the break.

They gave as good as they got in a second half that saw them reduced to 14 when Marcus Horan was shown yellow but that penalty seemed to galvanise them and a massive show of character sees them through to the penultimate stage.