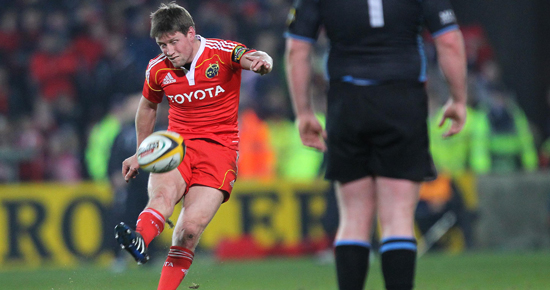 Munster defeat Glasgow Warriors 27-19 thanks to tries from Denis Hurley and Jean de Villiers, and the boot of Ronan O’Gara.

Munster defeat Glasgow Warriors 27-19 thanks to tries from Denis Hurley and Jean de Villiers, and the boot of Ronan O’Gara.

Munster’s Denis Hurley opened the scoring with a try after 15 minutes, O’Gara’s kick hitting the posts leaving it 5 nil.

An exchange of penalties followed from O’Gara and Dan Parks, 8-3 after 25 minutes.

Warrior’s centre Graeme Morrison saw yellow after a trip on Ian Dowling, and with a man down Munster failed to take advantage with Glasgow actually going ahead after an intercept try from captain John Barclay.

The visitors lead was shortlived as O’Gara kicked another penalty after 37 minutes to put Munster ahead by a point, 11-10.

Both O’Gara and Parks kept the scoreline ticking over in the second half as they kicked 3 penalties a piece.

It was not until the 74th minute before Jean de Villiers touched down for Munster’s second try and with O’Gara converting Munster held on to their 8 point lead until the final whistle. Munster 27 – Glasgow 19.

Tony McGahan after the win “We’ve really been building since the Edinburgh game and it was important we got the result tonight especially before going into the next few weeks.”

Mick O’Driscoll added “The scrums and the set-piece for us are an area we just need to improve and keep working on, and these things take time and we think we’re getting there.”

“The Glasgow team are a very good side and denying them the bonus point was a big thing for us.”