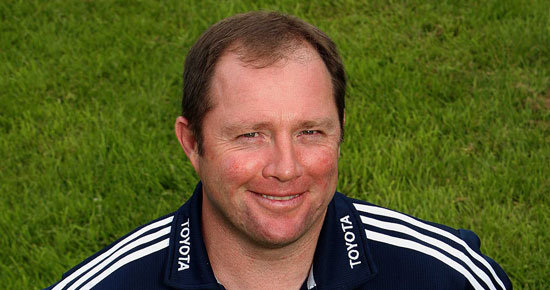 Munster Chief Executive Garrett Fitzgerald today confirmed that Tony McGahan will continue on in his role as Director of Coaching for the next two seasons (2010/2011 & 2011/2012).

Munster Chief Executive Garrett Fitzgerald today confirmed that Tony McGahan will continue on in his role as Director of Coaching for the next two seasons (2010/2011 & 2011/2012).

The 37 year old McGahan took over from Declan Kidney at the start of last season having joined the Munster set up in February 2005 as Defence Coach.  That role that had expanded to Defence/Backs/Skills coach when Munster won Heineken Cup titles in 2006 and 2008.

Comment on the re-appointment, Fitzgerald said,  ” We’re obviously delighted that we have come to agreement with Tony for the immediate future. He has shown, in his short space of time as a head coach, that he has all the attributes to keep Munster Rugby to the forefront of the international club game while at the same time ensuring players have the required skill sets for the international game.

“We have already enjoyed considerable success in the course of his short tenure and we believe that Munster Rugby can only continue to prosper under his direction.”

The news comes at  a most opportune time as McGahan welcomes back his international contingent ahead of crucial matches in the Magners League and Heineken Cup. As he put the final touches to plans for a two day squad get-together he said. ” I’m very pleased to be remaining on here for the next number of seasons.

“It’s been a privilege to be involved with a group of players, management and officials such as are involved in Munster.  I’m really looking forward to the immediate future, with crucial Magners League and Heineken Cup games in  the offing, but  I’m also delighted, both personally and professionally,  to be remaining in Munster in the short term.”