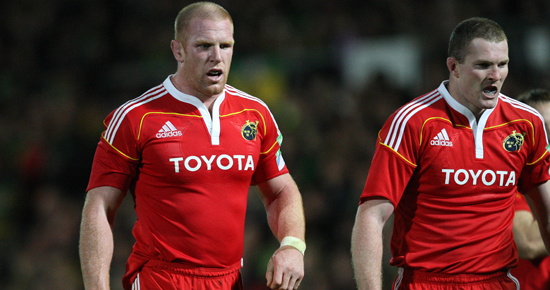 A 39 man panel for the upcoming Guinness Series of internationals in November against Australia, Fiji and South Africa has been announced.

A 39 man panel for the upcoming Guinness Series of internationals in November against Australia, Fiji and South Africa has been announced.

Thirteen Munster players have been named in the 39 man Irish Squad.

In the forwards, the back row provides the usual competition with Neil Best, the uncapped duo of Chris Henry and Sean O’Brien as well as the likes of Stephen Ferris, Denis Leamy, David Wallace and Jamie Heaslip all adding their names into the selection mix.

Uncapped props Brett Wilkinson and Cian Healy are named as front row options with Tony Buckley, Marcus Horan, John Hayes, Mike Ross and Tom Court the other props in the squad. The experience of Paul O’Connell, Leo Cullen and Donncha O’Callaghan will be augmented by the promising Donnacha Ryan and Devin Toner as possible selections in the second row.

In the backs, Peter Stringer, Tomas O’Leary and Eoin Reddan will be vying for the scrumhalf positions. Fergus McFadden is the only uncapped player in the outside backs.

Commenting on the squad and the upcoming November games, Ireland Coach Declan Kidney said, “We had an opportunity to work with most of the players selected in this squad over our three camps during the summer. Those sessions were about giving chances to as many players as possible following last year and after a third of the season gone so far, this November squad gives the majority of those players a chance to put their cases forward for selection.”

“November represents a challenge on several fronts with three full internationals and two A games against quality opposition, so it will mean that the strength of our resources will be tested.”

An A squad for the Tonga game and a 30 man squad for the Australia test match will be announced at the end of the camp next week in Limerick.

Kidney continued, “The games so far this season have given plenty of options in terms of competition for places. There were some hard calls made in selection, which is what you want, and players not included today will come into the reckoning for the two games against Tonga and Argentina Jaguares. We now have to try and come up with the combinations to not only win against some of the best teams in the world, with two of those sides ranked above us, but also continue to develop the international experience levels for some of those players.”