Catching Up With Ian Nagle 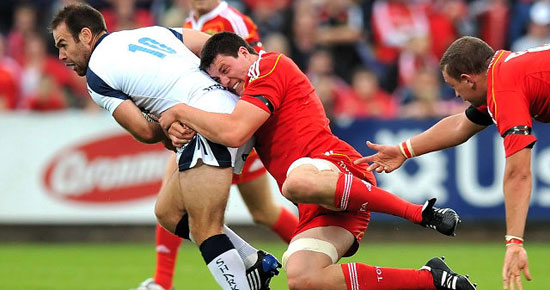 Ian’s recent time in the senior set up has given him the motivation to go all the way as he got a taste of senior life playing in the three pre-season games. But the 6ft 6 Nagle has his feet firmly on the ground in fully appreciating the need to work hard and further develop within the Academy.

Ian’s recent time in the senior set up has given him the motivation to go all the way as he got a taste of senior life playing in the three pre-season games. But the 6ft 6 Nagle has his feet firmly on the ground in fully appreciating the need to work hard and further develop within the Academy.

Hailing from Buttevant, Co. Cork Ian played his school rugby with Glenstal Abbey and has represented Ireland at U19 and U20s level. The 20 year old recently made the club move from UCC to Cork Con and is currently in his second year of the academy.

He has already lined out for Con this season but is out of action at the moment due to a sprained ankle picked up at training.

Ian, you certainly held your own in the pre-season games…. “To be honest I didn’t think the tour to Portugal went that well for me so I was just happy to play, and then after that I wanted to make sure I played well and prove to people that I actually could. But if you’re only as good as your last game it can just all end straight away and I want to reach more than that.”

What was it like playing with senior players like Paul Warwick, Mick O’Driscoll and Peter Stringer? “Ya it was really good, just to even see how they approached a game. Everyone was just so calm and collected out there so it was great to experience that.”

How did you adjust back to Academy life? “Once you get a taste of the senior set-up, it really motivates you to go on, it’s the end goal at the end of the day and it’s where you want to be. I believe the Academy can get us there but it was definitely nice to get a taste of it.”

It must help when you see players advancing like Tommy O’Donnell and Dave Ryan? “Ya it’s definitely good to see, it gives the Academy a good reputation, and shows that the work that is being done is paying off and that players are coming through.”

What about yourself and Dave Foley vying for the same position, is there a bit of friendly competition? “It’s great, in a lot of ways we drive each other on, always texting each other about our weights, sessions and how we played with our clubs at the weekend.”

Basically keeping tabs on each other? “Ya I get texts out of the blue from Foley asking me how I played, and it’s good if we both push each other along, hopefully the both of us can make it through.”

You must be disappointed on missing out on this Saturday’s Cork Con UL Bohs clash so? “Oh stop ya, we would have been coming up against each other but I won’t be playing with the injury, but I’ll get a second go at him though!”

What will the focus be for the season ahead for academy players? “Playing A games, there’s more of a focus on the team set-up this season and mixing the players together so getting game time in the A games is the immediate goal for me.”

And you’re studying in UCC? “Ya I’m in third year commerce so I’ll have placement as well this year for six months and I hope to major in Marketing.”

You seem to be balancing training and college well? “No not really, I’m basically a crammer so I literally just cram everything and get through!”

And how do you get away from rugby? “Surfing, I was in Hawaii for a month over the summer so I’ve taken it up and I’ve Fridays off each week so I hope to head out then.”