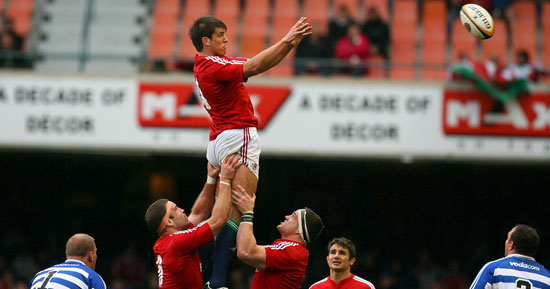 While Ian McGeechan says players will get one more chance to impress for Test selection against the Southern Kings in Port Elizabeth tomorrow, it is common knowledge that last Saturday’s scratchy 26-23 victory over Western Province constituted a final Test trial

While Ian McGeechan says players will get one more chance to impress for Test selection against the Southern Kings in Port Elizabeth tomorrow, it is common knowledge that last Saturday’s scratchy 26-23 victory over Western Province constituted a final Test trial

It’ll be proud day for the O’Callaghan family from Cork when Donncha captains the tourists against the Southern Kings – though he might already have pushed himself up the pecking order for Test selection following a solid showing against WP. Making just his second full start for the 2009 British and Irish lions, it proved a productive afternoon under the heavy skies in Cape Town, though has the Cork man done enough to merit inclusion on McGeehan’s first Test XV?

The English and Welsh press have spent the tour busily trying to come up with the right second row partner for Paul O’Connell. Alun-Wyn Jones is an athletic lock forward who is solid in the lineout, Nathan Hines brings abrasion and grunt while former Lion, Lawrence Dallaglio, has called on the selectors to pick his former Wasps team-mate, Simon Shaw alongside the Lions captain.

And yet, there’s hardly a mention of O’Callaghan, part of the best second row combo with O’Connell during the 2009 Six Nations, a pairing that was instrumental in helping Ireland bridge a 61-year gap to claim only a second Grand Slam in March. So why is this combination – and remember it’s McGeechan’s repeated aspiration to pick the best combinations on tour – not debated amongst the British

It appears they have agendas, particularly Sky Sports’ Stuart Barnes. While he’s an incisive and articulate commentator, knowledgeable and forthright in his views, Barnes has constantly undermined O’Connell’s captaincy from day one on this tour. In picking his Test XV in last weekend’s Sunday Times, the former England outhalf even managed to exclude O’Connell, which begs the question that should the tour go belly-up, is O’Connell likely to be scape-goated? Quite ridiculous really when one considers how well the Munster skipper is actually playing.

There should be no debate: O’Connell will start in Durban against the Boks, but it seems quite peculiar that McGeechan didn’t choose the Ireland second row pairing in any of the five tour games to date. Against Western Province, O’Callaghan demonstrated why he’s an invaluable option at ‘two’ in the lineout, rarely making a mistake while his unflagging industry around the park would prove invaluable when up against Bakkies Botha and the Boks. He also managed to carry a lot of ball, driving over the gain-line, something the Lions front five will need to do against the Boks.

In all, there could be up to eight Ireland players on the Test team on Saturday: O’Connell, Heaslip, O’Driscoll, Bowe can be classed as ‘definites’ at this stage, David Wallace and Ronan O’Gara are very close to selection while O’Callaghan and Luke Fitzgerald are clearly in with a shout.

O’Gara, meanwhile, may have nailed down his first ever Lions Test start after impressing in his two full outings to date. He was, alongside Jamie Roberts, the Lions best player against the Royal XV and though he has received some unwarranted criticism for kicking the ball too much against Natal, it appears he was under orders to use the grubber as often as he could -the Lions will, after all, encounter an aggressive South African blitz defence, and the grubber ‘in behind’ is a sound tactic. Had one or two turned into lucky bounces, the Munster out half would be classed a genius.

For Keith Earls, however, there could be the consolation of a place on the bench. Should Ugo Monye get the nod ahead of Fitzgerald, McGeechan will probably favour a centre/winger as his number 22, and Earls slips neatly into this category.

The tour has been something of a rollercoaster for the 21-year-old, and while a test place may elude him over the next few weeks, there’s every chance he’ll return to the Republic when the Lions visit again in 12 years’ time. Conditions against Western Province dictated that the Lions would play a more conservative brand of rugby, which must have been a source of frustration for the Munster centre. He made a few nice touches, but alongside Riki Flutey, was starved of possession. One thing is clear-  he has moved on from a nervous debut match against the Royal XV on Match One of the tour.

These can only be nervous times for players as they await the first Test team announcement. Sure, it’ll close-run thing between O’Gara and Stephen Jones for the No 10 shirt and for David Wallace and Martyn Williams for the openside berth. If form dictated, the two Munster men would get the nod but Test selections often throw up a surprise or two.

Could it be that O’Callaghan will be the surprise choice in the second row? Then again, given his pedigree and consistently good performances for Ireland and Munster over the years, O’Callaghan is ready-made for the Test environment. After all, didn’t Gert Smal once call him “Ireland’s Bakkie Botha”?