Munster A Commit to British and Irish Cup 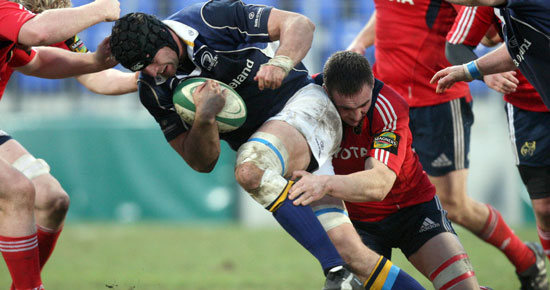 Next season will see Munster A compete in the British and Irish Cup, a new competition featuring teams from Ireland, Scotland, Wales and England.

Next season will see Munster A compete in the British and Irish Cup, a new competition featuring teams from Ireland, Scotland, Wales and England.

A new 24-team British and Irish Cup will start from the 09/10 season. Twelve teams from the English Championship, six from the Welsh Principality Premiership, Irish provinces Munster, Leinster and Ulster and three Scotland sides will compete for the inaugural trophy.

The teams will be divided into four pools of six, playing over five weekends during the Autumn international and RBS 6 Nations windows, with semi-finals and finals on April 24 and May 15 respectively.

Launching the new competition today, Terry Burwell, the Rugby Football Union’s Tournaments and Competitions Director, said: “This is an exciting new tournament that will provide quality cross-border competition and will be a winner with players, coaches and fans alike.

“There is a real appetite for this competition and, from an English point of view, it will give Championship clubs an additional meaningful competition alongside their league structure.”

Irish Rugby Football Union Director of Rugby Eddie Wigglesworth said: “From an Irish perspective we welcome the introduction of the British & Irish Cup which will provide a very competitive professional game structure to meet the needs of our emerging contracted players.”

“The teams involved are well known rugby entities in their own right and, in conjunction with our existing internal structures, will ensure that this group of contracted professionals have the necessary professional game exposure to meet the increasingly competitive demands at Magners League and Heineken Cup levels.  It also provides a unique cross border game opportunity for Irish coaches and referees.”

“Overall, the British & Irish Cup introduces a more structured approach to the existing Ireland provincial A game programme in each province.  In 2009/10 this competition when combined with the existing” A” interprovincial series will deliver the same number of games as agreed last year, with only the semi final and finals additional games. Games will take place over the extended weekends (Thursday – Sunday) and will not conflict at any point in the season with the AIB league weekends or the latter stages of the AIB cup.”

“The Irish Rugby scene in the context of our neighbours is small but very dynamic and thankfully very productive player wise. We need this additional professional game opportunity to augment the existing provincial Academy and Development player structure and also need a very strong domestic league. The AIB League represents the top level of our domestic game and professional player involvement in the AIB League is important to both the clubs and our professional structure. We believe this more structured approach can alleviate many of the current interface issues in the coming seasons.”

Welsh Rugby Union Head of Performance and Development Joe Lydon said: “We are delighted to be fully involved in this exciting new competition.

“It will engage all our teams in the type of cross-border sporting rivalry which will generate support and help improve the standard of play in all the teams involved.

“Here in Wales we know the appetite for this level of competition exists and it will deliver measurable benefits to the development and sustainability of the professional and semi-professional sport here.

“The names of the Welsh clubs involved will be familiar to rugby followers from around the world as they formed the tradition and history of the national sport of Wales.

“We have already received the backing in principle of our Premiership Division clubs and we look forward to welcoming to Wales some of the best young players from around the UK and Ireland.”

Scottish Rugby’s National Academy Manager Stephen Gemmell, added: “Scottish Rugby welcomes the launch of the British & Irish Cup. This competition will give some of our best players, including those from our top two clubs in Premiership Division 1, an opportunity to test themselves in an intense environment against quality, battle-hardened opposition from throughout the British Isles. We all believe such a competition will serve as a real boost to our game.”

3 Irish provinces – Munster A, Leinster A and Ulster A

Semi finals scheduled for April 24, final for May 15