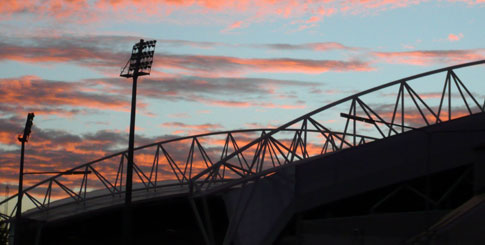 Thomond Park Stadium, doesn’t just provide the public with the finest rugby fare. It now has a new string to its bow – it’s very own exquisite French wine. As well as being graced by a host of fabulous rugby players and loyal supporters, this Saturday night’s 2009 Munster Rugby Awards will also see the unveiling (and serving) of Thomond Reserve wines, an event that is sure to have everyone licking their lips.

Thomond Reserve is the inspiration of four Munster players: Paul O’Connell, Ronan O’Gara, Alan Quinlan, all of whom are heading to South Africa for the Lions tour, and Freddie (Frederico) Pucciariello. This quartet approached Gary O’Donovan of Munster Wines with the idea that Gary would utilise his many years’ experience and contacts in the wine trade to help Thomond Park Stadium establish a wine reserve that would quite literally be the toast of Munster.

The name Thomond Reserve is intended to link Thomond Park Stadium – the Munster players’ place of work, of course – with the sterling ethos of French wine production. Thomond Reserve has been developed for two main reasons: one, to offer a stadium wine (we can’t call it a house wine, can we?) at all Thomond Park Stadium events; and two, to provide the public at large with the opportunity to enjoy the finest, most exquisite wines, wines that represent the best of two worlds steeped in excellence.

It should come as no surprise to anyone that Thomond Park Stadium has chosen only the very best wine to bear the Thomond Reserve name. The wine is sourced from a region in the South of France known as Languedoc-Roussillon. The Languedoc-Roussillon region is dominated by 740,300 acres (2,996 km2) of vineyards, which is three times the combined area of the vineyards in Bordeaux. The region has been an important winemaking centre for centuries.

There is a white wine, Sauvignon Blanc 2008 vintage, and a red, Merlot 2007 vintage. The white is light, crispy, zesty and fresh with light lemon fruit flavours, while the red is dense and full of red and black fruits. Exceptional for a wine of this type, the Merlot comes from 40-year-old vines, which gives it a great spectrum and complexity of flavours – far more than one would expect for a wine of this price.

If you can’t make it to the Munster Rugby Awards this Saturday, don’t fret. There will be plenty more chances to sample the wines of Thomond Reserve. The wines are available from any of the 15 O’Donovan Off Licences located in Cork City and county; they can also be acquired by visiting www.munsterwine.ie. And as already mentioned, Thomond Reserve wine will be available at all future events held in Thomond Park Stadium. After all, what could be better than this? A sumptuous tipple to wash down a feast of wonderful rugby.

If you are interested in attending this Saturday’s 2009 Munster Rugby Awards, enquiries can be made by contacting info@munsterrugby.ie.