Munster in front at half-time in Murrayfield 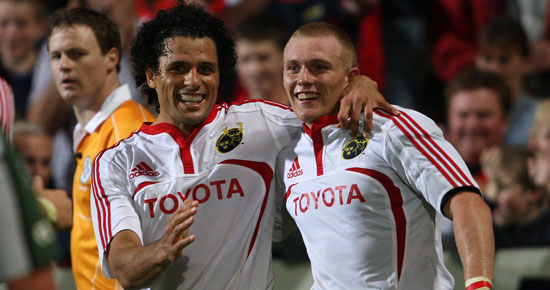 At half-time in this opening Magners League game at a wet and blustery Murrayfield, Munster lead Edinburgh by 17 points to 9.

At half-time in this opening Magners League game at a wet and blustery Murrayfield, Munster lead Edinburgh by 17 points to 9.

Munster were forced into a late change when John Hayes was forced out overnight through illness, replaced in the starting XV by Federico Pucciariello, with Tony Buckley flown in this morning as a bench replacement and just before kick-off Edinburgh lost Simon Webster (hip injury)to be replaced by Mark Robertson.

Munster won the kick-off but were immediately penalised and Chris Paterson made no mistake from 40 metres directly in front of the posts (3-0). The response was immediate and after Tomas O’Leary had made inroads on the right, Munster went wide left for Keith Earls to score his first Magners League try. Ronan O’Gara converted to put his side in front with just over four minutes gone (3-7).

The home side were fortunate not to go further behind four minutes later when they were penalised for not releasing only for O’Gara to miss with his effort from the 22 before Paterson reduced the deficit with a 30 metre penalty in the 21st minute. (6-7).

Earls collected a ball inside his 22 chipped the onrushing attackers, collected and took play into Edinburgh’s 22 and moments later, Paul O’Connell and Doug Howlett combined to put David Wallace in for Munster’s second try. O’Gara added the extras (6-14).

From the restart Munster were once again penalised and Paterson once again tagged on the points from the 22 in front of the posts to keep the home side in touch. (9-14) but when Ian Dowling was ‘taken out’ in the 36th minute O’Gara made no mistake with his penalty kick (9-17).

The penalties continued to flow and the one in the 38th minute saw Marcus Horan yellow carded as Munster went in at the break down to 14 but leading by eight points.