Hayes Out Of Munster Side 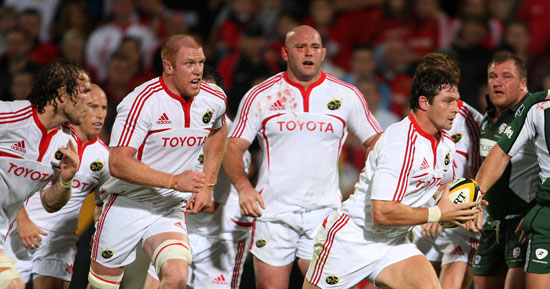 John Hayes has been withdrawn from the Munster side for this evening’s Magners League clash with Edinburgh (7.30pm) with Tony Buckley on his way to Scotland this morning as replacement.

John Hayes has been withdrawn from the Munster side for this evening’s Magners League clash with Edinburgh (7.30pm) with Tony Buckley on his way to Scotland this morning as replacement.

Munster arrived in the Scottish capital yesterday afternoon following their Aer Arann flight from Shannon that touched down just before 4.30pm. The squad went straight to the Herriott-Watt University Campus for their Captain’s Run and then onto the Marriott Hotel on the Glasgow Road.

Hayes sat out the Captain’s Run complaining of a sore throat and Buckley was contacted and immediately put on standby. Initially it was believed that Hayes’ condition might improve but that didn’t prove to be the case and early this morning Buckley was sent for and flew in from Cork.

In the circumstances, coach Tony McGahan has yet to decide whether or not to put Buckley in from the start, ” We have Feddy (Pucciariello) on the bench and so with Tony have good options there. At this stage we haven’t decided who to start. We’ll have a look at that later in the day. Our medical team believe John’s condition will clear up pretty quickly and I would expect to have him back in contention for a place next week.”

McGahan expressed his satisfaction with preparations for the Magners opener but refuses to get carried away with his squad’s form to date. ” Our pre-season has gone excellently. The boys have worked hard, everyone has worked hard. And we managed to bring some of the stuff we tried on the training pitch into the games we played which is always pleasing. But there were no points on offer for the games we played and the business end begins now. I don’t think you could be given a much tougher start, coming here to Edinburgh, but we’re looking forward to it and I think we’re going to see a good game of rugby tonight.”

Meanwhile Edinburgh coach Andy Robinson has left his side in no doubt what he expects of them this evening. “It is important on the back of all our pre-season work that we win on Friday” Robinson said. “A loss this weekend would make the pre-season friendly results pointless. So it is important that the guys who do have the experience and the talent really deliver.”

And Robinson has plenty of those experienced guys in his starting XV, selecting 11 internationals including Chris Paterson who is back with the club after a stint last season with Gloucester.

Murrayfield could see it’s biggest attendance for a Magners League game this evening given the number of internationals involved on both sides and the presence in the city of up to 3000 participants 17th (Air New Zealand) Golden Oldies World Rugby Festival.

Although the Munster squad woke this morning to clear skies, the weather forecast is for rain to start later this morning and to get progressively worse by the time the game kicks off (7.30 pm).