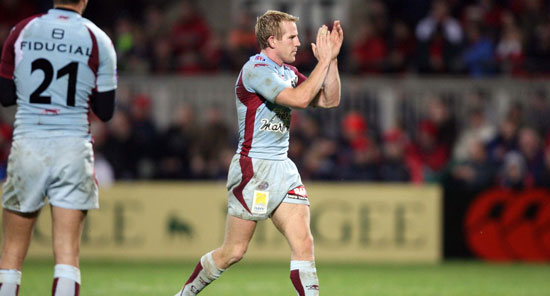 Following spells with Bourgoin and more recently Gloucester, Mike Prendergast returns to Munster colours next season, brought in on a one year contract as cover for Duncan Williams.

Following spells with Bourgoin and more recently Gloucester, Mike Prendergast returns to Munster colours next season, brought in on a one year contract as cover for Duncan Williams.

22 year old Williams, who came on as a replacement in the pre-season friendly against Viadana last year, is recovering from the hamstring injury sustained playing for Cork Constitution and Munster management felt it prudent to have an experienced player such as Prendergast as back-up.

Prendergast, just turned 30, spent a season with Bourgoin where he made five Heineken Cup appearances before moving to Gloucester last season. Prior to that he had made 39 appearances in the Munster jersey having made his debut in September 2001.

Williams (CBC/Cork Con) capped for Ireland at Schools and Under 21 level has come through the Munster Academy and this season moves on to a Development contract.

Meanwhile the start of the new season moves ever closer with the first of the Munster squad, those not involved at Ireland senior or A level expected back for the start of pre-season on Monday.

New head coach Tony McGahan arrives back from vacation in  Australia in the middle of next week and the international contingent will report for pre-season at the start of the third week in July.