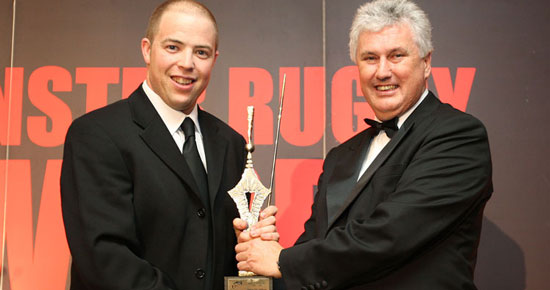 George Clancy and Peter Fitzgibbon are flying the referee flag for Ireland and Munster this weekend, further highlighting the success of Irish Referees.

George Clancy and Peter Fitzgibbon are flying the referee flag for Ireland and Munster this weekend, further highlighting the success of Irish Referees.

George Clancy is set to referee his first full International this weekend when South Africa take on Italy in Cape Town on Saturday. This comes at the end of a very successful season for George after refereeing the England v Barbarians game at the beginning of June, and different stages of the Heineken Cup. This success followed on from last year when he refereed the England Saxons and the New Zealand Maori in the Barclays Churchill Cup Final.

The Bruff man who was awarded Munster Referee of the Year in 2007 was promoted to the IRB World Elite Panel of Referees in April, joining Alain Rolland and Alan Lewis on the International Referee Panel.

Both Fitzgibbon and Clancy are forging successful referee careers, and have plenty to look forward to in the future. Their achievements highlight the success of the referee development programmes that are in place in Munster and Ireland.

If you are interested in refereeing, the next Munster Association of Referees course is taking place in Mallow GAA Club, Cork, on September 14th.