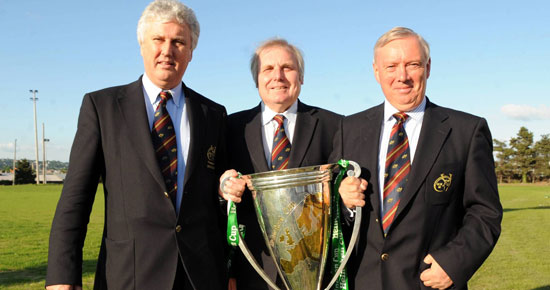 Sundays Well Nicholas Comyn was named as the new President of the Munster Branch IRFU at the annual AGM at Sundays Well RFC in Cork on June 4th.

Sundays Well Nicholas Comyn was named as the new President of the Munster Branch IRFU at the annual AGM at Sundays Well RFC in Cork on June 4th.

Nicholas succeeds outgoing President Gerry O’Loughlin, after serving the 07/08 season as Munster Branch Vice-President.  Nicholas brings with him a wealth of experience through his different rugby roles – as a player, a manager, a referee and Club President.

Hailing from Mallow, Co. Cork, Nicholas attended Mallow N.S where he originally played hurling and football, before being introduced to rugby.  He attended Clongowes College for five years and in this time played Senior Cup rugby for two years as a centre or left wing.

Nicholas went on to study a BA in Economics and a Masters of Civil Law in Unversity College Dublin, where he played rugby for two years, whilst also playing Junior rugby with his local club Mallow RFC with brother Arthur.  He continued his dual status honours, as he lined out with the Palmerstown Senior side for four years. In his playing career with Mallow RFC, they won the O’Neill Cup and the County Cup on two occasions. Nicholas also had representative honours with Munster Rugby, lining out for the Munster Juniors for three seasons in the late sixties, and his provincial representation was not only confined to Munster. He also played with Connaught, as his father and family came from East Galway, featuring on the Connaught Schools squad in 1964 and on the Connaught Senior side in the seventies.

He returned to Cork in 1970 and joined his brother once again, playing Senior rugby for Cork Constitution for two years.  His final port of call was Sundays Well RFC where he played for five years before retiring in 1977.

Following his playing career, Nicholas continued to contribute to the game by joining the Munster Association of Referees for five years.  In more recent years he managed the Sunday’s Well Senior team and held the postion of Club President for three different seasons, most notably the Sunday’s Well Centenary year in 2006.

When not involved with all things rugby, Nicholas has a keen interest in horses and tennis.  He has three children, Keith, Amanda and Nicole. He is a past President of the Southern Law Association and twice a former President of the Cork Lions Club.  Nicholas is involved with Munster Rugby in a work capacity also as he is a partner with Ronan Daly Jermyn Solicitors, Munster Rugby’s Official Legal Advisor.

In his new role as President of the Munster Branch, Nicholas is only too aware that developing the game both on and off the field is a priority. Increasing player participation and games, and improving facilities are ongoing challenges.  He supports the new changes of governance and would like to see these being implemented.

One of the key focus points for Nicholas, is to help increase the involvement between the Clubs and the Branch, by “improving the communciation links between the Branch, Clubs, Players and Underage structure”.  Nicholas would like to see “more cooperation between all the regions in Munster for the betterment of Munster Rugby”.

Furthermore he believes the Mini and Underage section are an extremely important facet of the Domestic Game, and developing and improving facilities for both is imperative for the future and ongoing success of rugby in Munster.

As Nicholas looks forward to the opening of the New Thomond Park Stadium, he recognises that “the development of Musgrave Park is a must for the future of rugby in Cork”, and he will actively work with the Development Committee on this matter.

“I look forward to working with Garrett Fitzgerald, who I knew well in his previous working life and greatly appreciate his commitment, sensibility and hard work, and liaising closely with all the professional staff, particularly Ultan O’Callaghan, in his role as PDGM”.

Off the back of Munster’s recent Heineken Cup success, Nicholas is hopeful they can retain the Heineken Cup in 2009, and finally, wanted “to wish Tony McGahan all the best in his new role as Munster Rugby coach”.