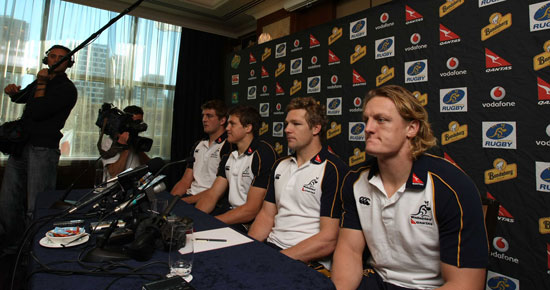 Munster’s Ireland internationals in Melbourne could be excused for thinking about calling in the Fraud Squad ahead of the Test against Australia on Saturday morning.

Munster’s Ireland internationals in Melbourne could be excused for thinking about calling in the Fraud Squad ahead of the Test against Australia on Saturday morning.

It was traumatic enough to have former coach Alan Gaffney use his ‘insider dealings’ to plot their downfall in that nerve tingling Heineken Cup semi-final back in April.

But, now Jim Williams, their one-time skipper who helped mastermind the province’s second successful assault on Europe, will try to go one better than his fellow Aussie in his opening match as the Wallabies’ assistant-coach.

Indeed, the popular Seamus, as he became known during a memorably six-year stint here, has much more in common with Munster contingent than his new players and will probably have to think twice about which dressing-room to enter.

Either way the end of the one of the most demanding seasons is in sight for Paul O’Connell and company and only those with hearts of stone would deny the Munster boys their well-earned holiday.

And it’s certainly been a rollercoaster ride, ranging from the despair of the World Cup in France, where the reality contrasted sharply with expectations, to the indescribable high of beating Toulouse in another epic Heineken Cup final.

Munster’s elite are definitely in the middle of major change in their profession. As they attempt to arrest an unwelcome series of defeats ‘down under’ their bosses at home are completing a new management team for next season.

And while all that’s going on behind the scenes new Ireland coach Declan Kidney and manager Paul McNaughton are keeping an eye on affairs from a distance in Australia, after which they’ll take over from the interim stewardship of Michael Bradley and Niall O’Donovan.

That’s for the future, however. The great concern now is how Big Jim is going to implement a plan to nullify Ireland’s clear threat up front. Given his involvement as player and later coach Jim probably knows the Munster players better than they know themselves and is sure to have a cunning plot in place.

And if it’s anything like Alan Gaffney’s thinking then Ireland can expect as hairy an outing as that fretful afternoon at the Coventry Arena.

Gaffney’s Saracens met the Munster pack head-on to such an extent that the favourites had to sweat on an 18-16 score line in the closing 10 minutes before breathing a collective sigh of relief at the final whistle.

Even first-half tries from Ronan O’Gara and Alan Quinlan didn’t affect the London club’s thinking and they were right in the match until the nervous end.

Now the Munster lads on duty on Saturday are bracing themselves for an even greater challenge as Williams spills the beans on props Marcus Horan and John Hayes, the second-rows O’Connell and Donncha O’Callaghan and the tearaways, David Wallace and Denis Leamy in the back-row.

And the restoration of the O’Gara-Peter Stringer half-back axis, a more than welcome boost to the number nine’s difficult season, is sure to come in for special treatment, as well.

Of course, formulating a plan to counter-act Ireland’s aggression at the break-down and contact in general is one aspect. It’s another for it to succeed and O’Connell et al would relish putting one over their old sparring partner.

You can just imagine the slagging when it’s all over. Picture the bould Donncha getting hold of his former foot soldier and letting him know all about it. I’m sure it’s a major motivating factor in their thinking.

And the best of all is that Jim knows it’s coming, too.

All we can do now is sit back, enjoy the spectacle, hope the result is favourable and all concerned return home intact for a well-earned break.

By the way, lads, the Heineken Cup draw is on Tuesday!