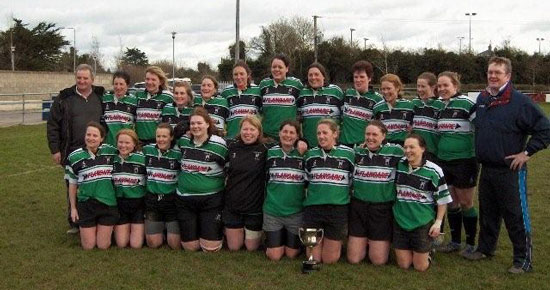 Clonmel scored their most emphatic victory yet with a 21-5 win over Highfield in the All-Ireland Cup Final. On a blustery day in Navan, Clonmel made light of conditions to come away with this famous and well-deserved win.

Clonmel scored their most emphatic victory yet with a 21-5 win over Highfield in the All-Ireland Cup Final. On a blustery day in Navan, Clonmel made light of conditions to come away with this famous and well-deserved win.

From the kick-off Clonmel were under severe pressure from a well-organised Highfield who were contesting the final for the second year running.  Playing with a strong wind to their backs Highfield didn’t let the occasion get to them and came out of the blocks much quicker than Clonmel and asked serious questions of their defense.  After a 15 minute spell of intense pressure Clonmel conceded a penalty which Highfield elected to kick.  The resulting penalty was missed and for all their dominance Highfield failed to score.  From the drop out Clonmel put Highfield back into their half and kept them there for the remainder of the 40 minutes.  Clonmel pack started to dictate play and slowly but surely Highfield’s confidence started to dwindle.  After a series of scrums, picks from the bottoms of rucks and mauls Laura Healy crashed over for a try that was well-deserved.  The half-time whistle followed shortly leaving Clonmel 5-0 ahead.

Clonmel felt in confident mood and it showed from the start of the second half as Clonmel kept Highfield pinned back in their half with the aid of a strong breeze.  Highfield could do little to relieve the pressure and when a way ward kick was caught brilliantly by Rebecca Hallahan she danced her past a number of defenders and set up what was to be a wonderful try.  Bernadette Carrigan, Jean Lonergan, Sadhbh Dromey and Helen Quirke were all involved and it was Quirke who got the final touchdown in the corner.  The conversion missed Clonmel led 10-0 and were looking completely in control.  Natasha O’Keefe, Jean Lonergan, Kate O’Loughlin, and Laura Healy were really dominating up front while the backline were enhancing their reputations as a defensive unit by not letting Highfield break the gain line once.  A chip over the top by Niamh Briggs allowed Bernadette Carrigan to touchdown in the corner.  Highfield to their credit never gave up and tried running ball from their own 22, Clonmel’s defence stood strong as Highfield were penalised for holding on on a number of occasions.  Niamh Briggs slotted two penalties to help Clonmel into a 21-0 lead.  However for the last 15 minutes Clonmel’s concentration and discipline slipped as Highfield gained yards up the field and after a succession of penalties crashed over for their only score of the match.

This was to be Clonmel’s day as shortly after the referee blew the final whistle and on a day when the whole squad played out of their skins Clonmel were crowned All-Ireland Cup Champions!!