Comfortable and Deserved Victory for Ireland 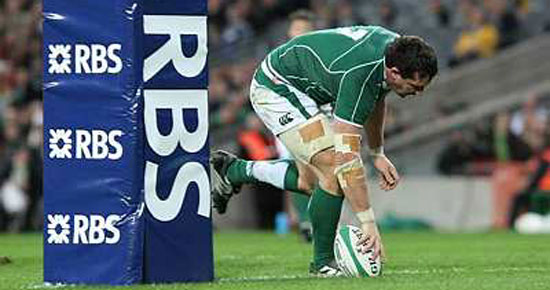 A 79th minute try from Tommy Bowe, his second of the game, helped Ireland to a 34-13 victory over Scotland in Croke Park today in front of a 74,234 crowd.

A 79th minute try from Tommy Bowe, his second of the game, helped Ireland to a 34-13 victory over Scotland in Croke Park today in front of a 74,234 crowd.

Leading 14-6 at the break, Ireland went further ahead within a minute of the restart when a trademark Ronan O’Gara crossfield kick was collected by prop Marcus Horan for his side’s third try and although O’Gara missed the conversion he made amends seven minutes later with a well struck penalty for a commanding 22-6 lead.

Scotland enjoyed the better of the opening exchanges but teak tough forward defence left tem relying on a backline that really didn’t have the guile to beat their Irish opposites.

The game’s opening score came in 20th minute when, with the Irish backs lined up left on their put-in to a scrum seven metres out, Jamie Heaslip picked and went right then passed inside to Wallace who scored with some degree of ease under the posts.

Paterson knocked over a penalty four minutes later but almost immediately Robert Kearney was the beneficiary of clever play by O’Gara and then skipper Brian O’Driscoll whose long pass sent the Dundalk man over on the left for his first senior international try.

Any hopes of a Scottish revival were knocked firmly on the head with the early second half try from Horan, with Webster’s try simply a wake-up call for an Irish side fully deserving of this victory.