Time To Give The Coach A Break ? 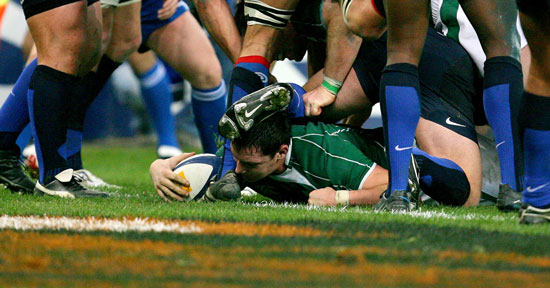 Accepting that one swallow doesn’t make a summer, there are perhaps some Irish people who may consider odering up a large dollop of humble-pie pie this coming week.

Accepting that one swallow doesn’t make a summer, there are perhaps some Irish people who may consider odering up a large dollop of humble-pie pie this coming week.

Paris has inspired some of the greatest writers in the past and it was meant to provide the perfect back-drop for Eddie O’Sullivan to compose his letter of resignation to the Continuity IRFU. The letter of apology addressed to the 4×4 cubs of the Celtic Tiger could follow in due course, that golden generation denied their just desserts (World Cup, Grand Slam etc etc) by O’Sullivan’s stubborn refusal to listen to the advice of the George Hook’s of this world !

But then zut alors, the tumbril bearing O’Sullivan inexorably towards the guillotine, slowed appreciably around 4.10pm on Saturday, came to a halt shortly after 5pm and by 6pm the boul Scarlet (they seek him here, they seek him there, the hacks they seek him everywhere) O’Sullivan had not only been sprung but granted a reprieve.

Of course there are those who will point out that this was a French side that contained  unrecognisable names but 9 to 15 oozed class and in the end France were lucky to win.

So we could so easily have been looking at a situation where today, Ireland were sitting top of the table, genuine contenders for the elusive Grand Slam. Now however, there is a championship and Triple Crown on offer and no reason to be pessimistic about capturing either or both.

The obvious obstacles are England and Wales because Scotland confirmed the impression they gave from the opening round that they are a fairly ordinary outfit with a style of play just a little less shocking than their international garb. They’ll probably end up with the Wooden Spoon which is what they’ll deserve if only for appearing in pyjama-like Canterbury gear that most people would only wear to bed to frighten themselves to sleep or ward off the boogey man.

England continue to depress rather than impress but ask yourself this. If Ireland were denied the number of front-liners that Ashton is, how well would we do ? It still leaves them a very dangerous animal at Twickenham but only if Warren Gatland gets his own back on Eddie O a week previous in Parc na Crocaigh.

A few George Hook predictions ahead of the game in Paris.

“Thomas Lievermont has not only given his team a plan but also a philosophy. He, too, understands that the modern game is now played by a 22-man team and must be rotated to provide freshness and competition.” – His replacements, after France had raced 20 points clear, almost led to defeat.

“The French defensive line will not wilt ” – Yeh  right ! They were fairly wilting with ten to go.

“This afternoon, as the betting fraternity are fond of telling us, is a two-horse race. It may well be, but between a thoroughbred and a selling plater. The inferior team could win if there is an early disaster like the first fence at the Grand National or Foinavon’s race to victory. It is much more likely that France will cruise to victory with Shergar-like ease.” – Hmmmm, nice one George.